Book Feature & Excerpt:Twilight of the Drifter by Shelly Frome 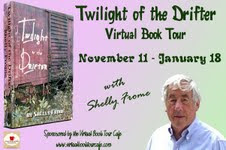 Wolf Creek was silent again, shrouded and hidden away in the fading early December light.
Then the cracking sound of wood as the old hunter’s blind gave way somewhere in the near distance, a sudden scream and a muffled thud. The cracking sound was not nearly as sharp as the first gunshot or the second, the scream not at all as piercing as the first cry or as grating as the moans that followed and faded.
The coonhound took off immediately, ignoring the touch of frost in the creek water, the obstacle course of fallen tree limbs and bare forked branches, the muddy slope and the snare and tangle of vines and whip-like saplings. Within seconds, the hound was bounding higher until he came upon a prone scrawny figure totally unlike the one that had just fallen on the opposite bank.
Sniffing around, barking and howling, the hound snapped at the flimsy jacket and bit into it. As the scrawny little figure began to stir, he tore into the sleeve, ripping it to shreds and barked and howled again, turning back for instructions. The sight of the skinny flailing arms sent the coonhound back on its haunches—half guarding, half confused as it turned around yet again, looking down the slope to the creek bed, still waiting for a signal.
Presently, a tall, rangy man made his way across the same obstacle course, long-handled shovel in hand. But he was only in time to catch sight of a girl clutching her head, staggering away from the scene through the tangles and deepening shadows. Then again, it could’ve been a boy for all he knew, but he settled on a girl, a flat-chested tomboy, more like. Casting his gaze up to the snapped rungs of the tree-ladder, he spotted the broken edge of the rotting hunters blind some eight feet above where she could’ve seen everything.
The coonhound began circling around him, displaying the shards of material dangling from his jaw. Instinctively, the man rushed forward. Then he thought better of it as his overalls got snagged in the brambles. From the look of things, the girl was probably dazed and confused and wouldn’t get as far as the dirt drive, if that.
Wrong guess. The slam of a hood as the flat-bed’s worn V-8 motor fired-up, the grinding of gears and the familiar whine and squeal of tires signaled the tomboy was away and well out of reach.

Shelly Frome is a member of Mystery Writers of America, a professor of dramatic arts emeritus at the University of Connecticut, a former professional actor, a writer of mysteries, books on theater and film, and articles on the performing arts appearing in a number of periodicals in the U.S. and the U.K. He is also a film critic and a contributor to writers’ blogs. His fiction includes Lilac Moon, Sun Dance for Andy Horn, Tinseltown Riff and the trans-Atlantic cozy The Twinning Murders. Among his works of non-fiction are the acclaimed The Actors Studio and texts on the art and craft of screenwriting and writing for the stage. Twilight of the Drifter, his latest novel, is a southern gothic crime-and-blues odyssey.