Author Interview/Giveaway: Communion by B. Patterson 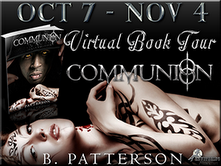 Hi, I’m B. Patterson. I always said I would never write a book about vampires, yet here we are.

While in college, I majored in Psychology and minored in Japanese. I didn’t really have a career plan. But now I work as an academic advisor at a college and help other people come up with theirs.

I’ve wanted to be a writer as long as I can remember. But my earliest memory of writing happened right after an episode of an old cartoon called the Muppet Babies (Yes, the Muppets! Kermi, Miss Piggy, the whole crew). Gonzo was narrating a detective story and I remember writing a similar story in my composition notebook as soon as the episode went off.


2. How long did it take you to write Communion?

The very first incarnation of Lester, the main character, came to me Fall 2012. But I didn’t start planning out a story for him until January of this year. After about a week and a half of planning the story out (I set aside 3 weeks to do so), I completely fell for the story and knew I had to get to work on this one. I wasn’t done with the first presentable draft until early June.

No more than 3 times. My week and a half of planning gave me a strong, basic outline for the story.

2-4, depending on my writing load. I also read a lot of other people’s work on Wattpad.com.

SO TOUGH!! I’m a huge fan of Louis from Interview with a Vampire. In all of the vampire books I’ve read, very few take the time to savor the experience of being a vampire the way he did. Also, he struggles with the moral consequences of being a vampire (feeding on others to live forever) in a way that other vampires brush over.

7. State 5 random facts about yourself.
I speak Japanese
I switched my major 5 times while I was in college (I still got out in 4 years)
This year for Halloween, I’m going to be a dhampir
I haven’t played video games in years, but I’m eagerly waiting for Kingdom Hearts 3 to come out
I like chicken

The Magicians by Lev Grossman.

A short one called Sparkle, which will be available in April.

Communion is the book a lot of people have been waiting for. It’s a Young Adult title from a male perspective. Lester is conflicted and at times uncertain, but is a likable character despite the situation he’s found himself in.
My dhampir are dark and often struggle morally with their decision to live as they do.
Lastly, my characters are believable. How would you act if you were turned into a blood sucker? You’ll see in Communion that my characters are as rational as they come. 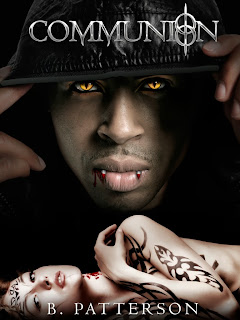 Book Description:
"Lester Fuller knows isolation well. It has been his only friend since Jadarius Singleton humiliated him last year. But one night after Jadarius's taunts go too far, Lester stumbles upon Gwynn's body. He's sure she's dead. Until she bites him.

Vampires are extinct. There are only the dhampir.

Now something more than human, Lester struggles to determine where he fits in this new society. Just what secrets about the dhampir are his friends keeping from him? And what will he do when a notorious figure from dhampir history sets her eyes on him?"


I’m a 25 year old writer. I’m a graduate of North Carolina State University where I majored in Psychology and minored in Japanese. I currently live in Maryland.

I wrote a lot as a kid. I began a new story (or 3 or 4) every school year, but rarely finished them. I finally finished one when I was 16. It was about ninjas. It was really bad.

Communion, my first completed novel worth publishing, will be released October 1st. I have that and many other works coming down the pipeline. I plan to be writing for many years to come.

My values as a writer include:
Writing high-quality books
Diversity
Integrity
Entertainment

Where you can find author: