Book Review: LaRue for Mayor: Letters from the Campaign Trail by Mark Teague 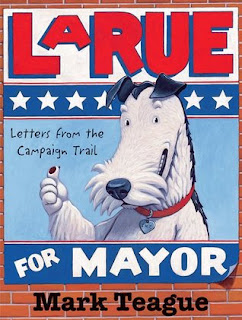 Ike finds his civil liberties at risk when Hugo Bugwort, the hard line mayoral candidate, promises to crack down on free-roaming, fun-loving dogs. As the anti-dog rhetoric escalates, Ike is compelled to join the political fray and run for mayor himself. Bugwort rethinks his pooch-policies when Ike selflessly helps rescue him after he collapses at a campaign rally. Told through letters to Mrs. LaRue and local newspaper accounts, Mark Teague delivers another excellent execution of split-screen visuals and uproarious escapades of the unforgettable Ike.


Mine: What a cute book – glad I read after the election though.

Ike’s campaign gathers steam, but the dogs seem to be causing problems. Chief Bugwort is giving his big speech when something happens and he does feel well – Ike to the rescue with Rocky Road ice cream. Bugwort decides dogs aren’t that bad after all. Soon LaRue is soon to be the Vice Mayor.