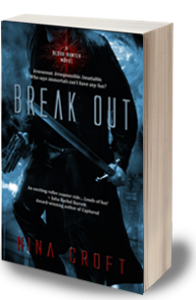 I really wanted to write a space opera—I've always loved them ever since watching Star Wars a long time ago, and falling in love with Han Solo, and more recently, Jos Whedon's, Firefly, and falling in love all over again. But I usually write paranormal romance, as I have a fondness for vampires and other creatures of the night. So, I was sitting watching Firefly for the fifth time trying to decide which project to work on next. I couldn't decide between the space opera or the paranormal, so I decided why not combine the two. After all, if vampires exist now, why shouldn't they exist in the future?

The more I thought about the idea, the more I like it, and so, Ricardo Sanchez, space pilot and vampire came into being.

Break Out, book one in the Blood Hunter series, looks at the issue of immortality—do we really want to live forever, and how much are we willing to pay to get it? Break Out is set in a future where man has discovered the secret of immortality—Meridian. But Meridian is rare and expensive and only available to the select few who can pay the price. Everyone wants the chance to live forever, and many others have turned back to religion and another type of immortality. Then of course, there's my hero, Rico, who doesn't need either Meridian or the church, because he's already immortal.

I'm a planner, and probably the planning is the hardest part for me—it's when I need to make all the important decisions. I have to work on my outline, right down to the scene level, then I'll dig about into my characters heads, working out what they want and why, until finally, I get to that magical moment where they start talking in my head. Once that happens, the writing comes easy.

I also have a paranormal romance, Bittersweet Blood, out in December with Entangled. And my next project will be a follow up to that.

I'm a big believer in writing the sort of stories you love to read. That doesn't actually narrow things down much for me as I read lots of different things, but right now, mainly paranormal. But I also love science fiction, and adventure stories and time travel and...

Break Out is a combination of space opera and paranormal romance. I love writing in both genres because there is no limit to what you can do and where you can go.

Wonderful. Good reviews are great, but there's nothing like getting an email from a reader who genuinely likes your stuff. It makes all the work worthwhile.

I find writing about myself incredibly difficult so I guess a good question for me would be—what animals do you have? Then I could write about them instead of me.

And the answer would be: Well, there's Gencianna, the horse, Lola, Grunt and Pinky the dogs...

Relatively painless—I had my share of rejections, but I've learned to see them as a learning process and use any feedback I get. I started writing contemporary romance—that's where most of the rejections came from. I was told they like my writing, but I had too much external conflict. So I moved on to paranormal romance, where external conflict is expected, and I loved writing it from the start.

The second paranormal novella I wrote, The Prophecy, was accepted by Harlequin Nocturne Bites and published in 2010. Since then I've had seven other novellas released by various publishers. And I have my first full length novels coming out later this year.

I'm very lucky, in that a few years ago, I moved with my husband to a remote farm in the mountains of Southern Spain. It's a wonderful place to write, very inspiring and very few distractions, so now I write pretty much full-time. 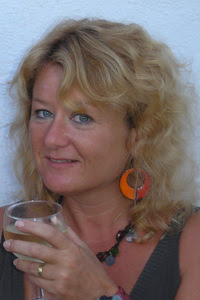 Nina Croft grew up in the north of England. After training as an accountant, she spent four years working as a volunteer in Zambia which left her with a love of the sun and a dislike of 9-5 work. She then spent a number of years mixing travel (whenever possible) with work (whenever necessary) but has now settled down to a life of writing and picking almonds on a remote farm in the mountains of southern Spain.

Irreverent. Irresponsible. Insatiable. Who says immortals can't have any fun?

The year is 3048, Earth is no longer habitable, and man has fled to the stars where they’ve discovered the secret of immortality—Meridian. Unfortunately, the radioactive mineral is exorbitantly expensive and only available to a select few. A new class comprised of the super rich and immortal soon evolves. The Collective, as they’re called, rule the universe.

Two-thousand-year-old Ricardo Sanchez, vampire and rogue pilot of the space cruiser, El Cazador, can’t resist two things: gorgeous women and impossible jobs. When beautiful Skylar Rossaria approaches him to break a prisoner out of the Collective’s maximum security prison on Trakis One, Rico jumps at the chance. Being hunted by the Collective has never been so dangerous–or so fun!