Guest Post - Where Are You, Anne Bonny? by Daniel Lance Wright

I want to thank Sue for the opportunity to be a guest on her blog and commend her for the appearance and information offered on the site. I can only aspire to such detail and organization in my own blog site. Of course, my office and my bedroom aren’t such neat places either; so . . .

To give you a quick heads-up on who I am and a little on what makes me tick; I write novels and short stories, mostly novels, and do not favor one genre over another, not yet anyhow. When an idea for a novel comes to me, whizzing out of the cosmos and slamming into my forehead, it has not done so in the same genre twice in a row. To clarify, I’ve written nine novels, three published, two in contract and one other under consideration by a publisher and, genre-wise, it breaks down like this: 2 soft science fiction, 3 young adult (although one might be too edgy for the classification), 1 suspense thriller, 1 paranormal, 1 historical drama and 1 mainstream/period. To confuse the stew a bit further, I’m currently working on the first draft of a Nicholas Sparks-esque love story. Whew! It’s exhausting. Each time I switch, I must learn a different style, so the story’s ebb and flow fits the genre, not an easy thing to do. And, sometimes, the genre chooses me, not the other way around. By the way, I do have a couple of short stories published as well; a science fiction and an inspirational mainstream.

I love to create a universe and characters then go on a journey with them in their world. If a writer cannot live in that world and only sees it, as he would through a camera lens, then it will be one-dimensional, flat. The reader will pick up on that and likely set the book aside. It must go far beyond seeing a mind’s-eye movie and describing it; one must actually travel with created characters in their world, not just view them from somewhere outside it. This is the only way it will come to life for the reader; the characters must live within the writer and not just appear as names on a page. I have begun countless manuscripts that were abandoned in the end because I was blocked from getting inside the mind of a protagonist. Therefore, the character quickly fell flat, nothing memorable whatsoever. This is my grandest struggle; and, a challenge I willingly embrace. This could, possibly, be considered my creed as a fiction writer.

I often hear authors tell of dreams kick-starting the conceptualization process on a novel. It’s not unusual since sleep is the only true time the mind is set free to roam. My novel “Where Are You, Anne Bonny?” (Rogue Phoenix Press/2010) came about that way. But, it wasn’t my dream. It was one that my eighty-seven-year-old father had. While visiting him one day, he said that he had a dream about a lady pirate that was a master of disguise. He thought it’d make a great novel. I won’t bore you with all the details. Suffice it to say, it was not the simple product of his imagination but a resurrected memory of something he’d read in the nineteen-fifties in Saturday Evening Post (I think) called “The Pirate Had Breasts”. I was only eight years old, but I remember the article and it had nothing to do with the story and everything to do with an artist’s rendering of a woman, naked from the waist up, holding a long knife in one hand and a rapier in the other. Okay, I know what you’re thinking; and you’re right. What eight-year-old boy would not remember such a picture? Now, get your mind out of the gutter and let’s move on.

Anne Bonny was an Irish lass, the love child of father, William Cormac, and the maid. She was born into wealth and knew that world well but was disowned at nineteen when she decided to marry a n’er-do-well by the name of James Bonny. She quickly learned the seedier side of life as a pirate. She was a fascinating person—ruthless, confused sexually, and equally comfortable among the rich as she was in a pirate’s lair. She was supposed to have hanged in St. Jago de la Vega, Jamaica in 1720. There are reasonable records that her partners in crime, Calico Jack Rackham and Mary Read, did die there but nothing on Anne Bonny. Did she hang? It is only assumed that she did. There are numerous theories as to what may have happened to her, but no one knows definitively. This opened the door very wide for a novel and I gladly walked right on through it, beginning the story in that sweaty Jamaican prison. “Where Are You, Anne Bonny?” is available at Amazon.com and RoguePhoenixPress.com. If you’re in the mood for a historical drama, I certainly recommend this one. After you’ve read it, let me know what you think of it (wrightthing@hotmail.com). I’d love to hear from you. Also, I’d be honored if you followed me on my blog 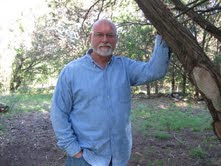 A lifelong Texan, Daniel (Danny) Lance Wright is a freelance fiction writer and novelist born in Lubbock, Texas now residing near Waco. He lives with Rickie, wife of 39 years and has two children and three grandchildren.

Having spent the first nineteen years of his life on a cotton farm on the South Plains and the next thirty-two in the television industry, he has seen the world from two distinctly different angles.

Please leave a comment on this post in appreciation of the Author
Posted by SueFitz at 12:07 AM