Book Blitz/#Giveaway : The Trouble with Family by Heather Hobbs 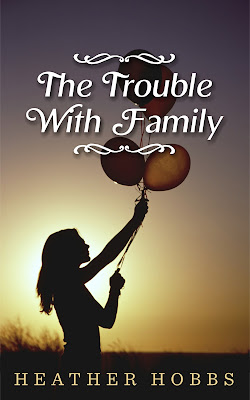 The Trouble with Family

Molly Anderson just found out her dad is getting married to a woman she’s only met once.Fourteen-year-old Molly had planned to spend the summer before high school reading books, eating junk food, and napping. Instead, she’s forced to spend her days juggling four new family members, a grumpy older brother, a crazy grandmother, and Max, the new boy next door. Having lost her mother in a car accident a year before, she’s not sure how many more changes she can take before she hits her breaking point.Based on an award-winning short story, The Trouble with Family tells the tale of a girl trying to make the most of her summer, not just survive it.This is the first book in the Molly Anderson series.

Excerpt:
The courtroom smelled like burnt popcorn.
Holding my breath, I shifted in my seat, making the hard wooden bench creak.
“This is taking forever,” Ben hissed into
my ear.
I ignored him and glanced across the aisle at my
soon-to-be stepsiblings. Clara cut her icy blue eyes at me without actually
turning her head. She sat beside her brother Sam, stiff and plastic-looking
with perfectly highlighted blond hair, only reinforcing my initial suspicion
that she was, in fact, a living Barbie doll. Sam, on the other hand, actually
looked over at me and offered a slight nod.
“Children of the Corn,” Ben
whispered.
I rolled my eyes and faced forward. “Just
because they’re blond-”
“Blond and creepy,” he interjected.
The doors at the back of the room opened and
Judge Newton walked in, followed closely by Dad and Susan.
Dad wore a charcoal grey suit; the only one he
owned. He looked nervous but happy as he smoothed the back of his dark brown
hair, making sure it was in place. Susan wore a short, lacy, white dress that
accentuated her long legs and blue wedge sandals that matched her eyes. Her
poorly-dyed orange hair was pulled back into a chignon. They held hands tightly
and walked slowly down the aisle until they were standing directly in front of
the judge.
“The scandal of Oak Lake,” I muttered.
Ben
looked at me quizzically and I shook my head. Never mind. That’s
what I’d overheard Ida Miller call the wedding yesterday. In a town of five
thousand people, a recently widowed man marrying a relative stranger was
something worth talking about.
Judge Newton was an older gray-haired woman with
small glasses and an air of indifference. She gave a tight smile and looked
around at all of us. “We are gathered together in the presence of these
witnesses to join this man and this woman in matrimony.”
Oh Lord.
Reality hit me like a ton of bricks. The smell
of popcorn mixed with the fact that my father was marrying a woman I’d only met
once made my stomach churn uneasily.
Beside me, Ben’s head fell into his hands. “I
can’t believe he’s doing this, Molly,” he mumbled.
My heart pumped faster; suddenly this was too
real.
Ben lifted his head and unbuttoned his
two-sizes-too-small suit jacket. He looked ridiculous but had refused to get a
new suit for the wedding. He also refused to comb his hair, which made him look
like a fifteen-year-old Albert Einstein.
Catching movement out of corner of my eye, I
looked across the aisle again. Clara was shifting in her seat, taking deep
breaths. It was hard to imagine the two of us sharing a bedroom. Sam’s foot
shook uncontrollably under the bench, but otherwise he appeared totally
unaffected.
Glancing back one row, I eyed Joseph, the oldest
of the three. He sat with his knees slightly askew so they wouldn’t hit the
back of the bench in front of him. He ran a hand through his sandy blond hair,
letting out an agitated sigh. While the rest of us were in dresses and suits,
he was wearing dark blue jeans, a white t-shirt, and dirty sneakers.
“If anyone can show just cause why this man and
this woman may not lawfully be joined together, let them speak now or hereafter
remain silent.” Judge Newton glanced around the courtroom.
Ben sat up straighter and I stared at him
wide-eyed, silently pleading for him to not do anything stupid. Dad would never
forgive us if we caused a scene.
The bench behind Ben squeaked and we all turned
our heads.
“Oops, sorry,” Big Mike, who was Dad’s boss,
laughed nervously.
If Gram had come to the wedding, she would have
objected. Instead, she refused to attend and moved out of the house. I was
going to miss her but understood the decision. Her daughter died a year ago and
her son-in-law was already getting remarried.
Judge Newton nodded, satisfied, and looked back
at Dad. “Do you have rings?”
Susan turned and motioned to Joseph. He stood
slowly and walked up the aisle, his dark brown eyes blinking rapidly, and gave
her two boxes. As he reached out his hand to pass her the rings, I noticed tiny
white scars that ran all the way up his left arm, like little flecks of light
trying to escape through his skin.
“Thanks, sweetie,” Susan said, squeezing
Joseph’s shoulder.
Judge Newton cleared her throat. “Susan
Katherine Wright, will you take this man…”
Joseph returned to his seat behind Clara and
Sam, all three of their faces expressionless.
“I do.”
“Ugh,” Ben moaned.
“Charles Ronald Anderson, will you take this
woman…”
I closed my eyes and swallowed hard as my
stomach rolled again.  “This is actually happening,” I whispered,
more to myself than anyone.
Everything
was about to change. “Oh man.” I put my hands over my stomach and turned my
attention back to the ceremony. I wanted it to be over so I could leave.
“I do,” Dad said.
Judge Newton finally smiled. “By the authority
vested in me by the State of Michigan, I pronounce you husband and wife.”
Dad and Susan turned and grinned at us as Big
Mike stood up, clapping his large hands together.
No one else clapped.

About the Author
Heather was born and raised in Michigan and currently lives in Colorado with her husband and two sweet but poorly-trained dogs. She has a BA in English Literature and a MA in Library Science. She is hard at work on her second book.
Author Links: