Cover/Trailer Reveal : Caught in the Ripples (The Water Rushes #2) by S. McPherson 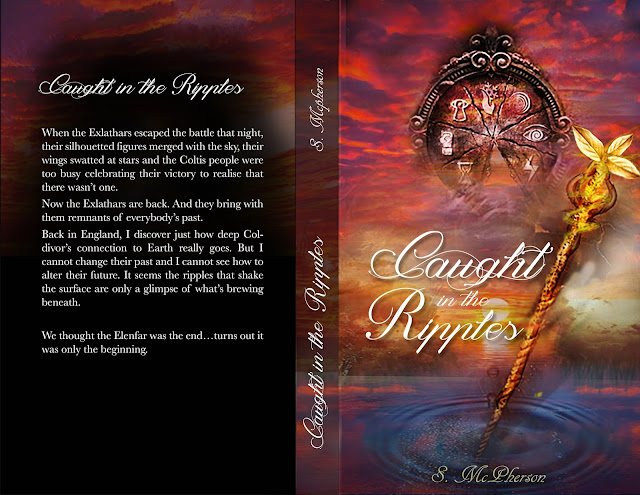 When the Exlathars escaped the battle that night, their silhouetted figures merged with the sky, their wings swatted at stars and the Coltis people were too busy celebrating their victory to realise that there wasn’t one.
Now the Exlathars are back. And they bring with them remnants of everybody’s past.
Back in England, Dezaray discovers just how deep Coldivor’s connection to Earth really goes. But she cannot change their past and she cannot see how to alter their future. So it seems the ripples that shake the surface are only a glimpse of what’s brewing beneath.
'Caught in the Ripples' delves deeper into the Water Rushes saga, answers questions the first book raised and plunges you into an ocean of intrigue and magic.
They thought the Elenfar was the end…turns out it was only the beginning.
Book One (click on image for Goodreads link):


S. McPherson is a young British expat living in Dubai and working as a kindergarten teacher. When she is not at work immersed in a world of imagination and fantasy created by the children, she is immersed in her own worlds of imagination and fantasy at home, dreaming up tales and writing them down. 'At Water’s Edge' is S. McPherson’s debut novel and the first in the romantic, fantasy series, 'The Water Rushes'.
Author Links: