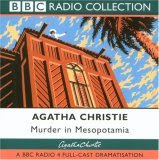 From the back:
Nurse Amy Leatheran is recruited to care for th frightened wife of an American archeologists at an excavation in the Iraqi desert. Are the wife’s fears mere hallucinations? When she is found bludgeoned to death, her paranoia proves, too late, fully justified. Famed Belgian detective Hercule Poirot, nearby on another mission, gets involved and realizes that every member of the team could be a suspect. Can Poirot stop the murder before he or she strikes again?

Mine:
Nurse Leatheran is brought in to take care of the wife who is fearful for her life. She keeps getting threatening letters telling her that she can not be with another man. She thought when she left America that she was safe, but the letters catch up to her in Iraq. One afternoon she is murdered and Poirot is brought in to help solve the crime.

It seems that every member of the excavation is a suspect, but who did really do it. Is it a crime of passion? We must understand that she was previously married and thought that her previous controlling husband was dead – but was he?

Poirot to the rescue to prove that the current husband is truly the previous husband and is a very jealous fool and does in fact kill his wife.
Posted by SueFitz at 12:22 PM