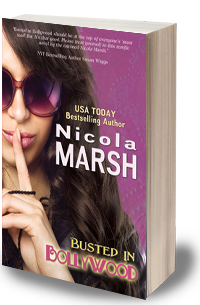 How did the ideas for your books come to you?
Most of my story ideas come to me in that hazy, pre-sleep phase…either a title or first line or character or situation will pop into my head and I brainstorm from there.

The idea for BUSTED IN BOLLYWOOD was inspired by the magic, mayhem and colour of Bollywood movies. My dad got me hooked on them one summer and I thought…’wouldn’t it be great to write a book with a Bollywood theme?’ So I did!

Is there a message in your novel that you want readers to grasp?
Must admit, I write fiction for entertainment value so I don’t expect my readers to take away messages. I guess if I channeled the heroine Shari in BUSTED IN BOLLYWOOD, the message would be ‘we all make mistakes but secrets can be our ultimate undoing. Trust your gut instincts. They’re usually right.’ Oh, and ‘Indian food rocks!’

The easiest would have to be hearing from delighted readers. Fan mail is the best!

What's next for you? Are you currently working on or have plans for future projects?
I have a Harlequin Romance scheduled for release December 2012. It’s a Christmas story featuring a hot Aussie surfer hero and a passionate Italian online marketing whiz heroine. They had a shared past in Capri so sparks are guaranteed to fly.

I have a Harlequin Romance releasing in January, WHO WANTS TO MARRY A MILLIONAIRE? (The book kicks off with the heroine chained to the hero’s precious housing development display!)

Then in February my next Harlequin Presents Extra, INTERVIEW WITH THE DAREDEVIL is released, with a George Clooney look-a-like hero. Enough said. 

I’m also currently working on a YA novel, from a male POV. I like a challenge!

Why did you choose to write for specific genre?
I’m a not-so-secret romantic and I love my happily-ever-afters. Love reading them, love writing them. There’s something truly sigh-worthy when the guy gets the girl (see, told you I was a romantic!) so writing guaranteed HEA is satisfying.

What's it like hearing that readers are eagerly awaiting your book's release date?
Writing is such a solitary occupation and writers are usually plagued by insecurities, so hearing from readers eagerly awaiting my next book (or talking up my last) is truly inspirational. Most readers don’t realise how uplifting a few simple words of appreciation, either in a review or email, can be to a writer struggling with deadlines and kids and life in general!


What is one question that you've always wanted to be asked in an interview? How would you answer that question?
Who are you walking the red carpet with at the movie premier of Busted in Bollywood?

I’ll have to check with Hugh Jackman, George Clooney, Alex O’Loughlin, Henry Cavill, Simon Baker, Jude Law, Rob Lowe, Gerard Butler, and get back to you.

What was your road to publications like?
I’ve always wanted to write but got sidetracked into the medical field. I worked as a physiotherapist for 13 years before finally putting pen to paper. Once I started writing, I couldn’t stop!

I started writing in 2001, sold my first Harlequin novel in 2003. My first book, featuring a speed-dating theme, hit shelves in 2004. I’ve published 30 novels with Harlequin Romance and Presents series, and BUSTED IN BOLLYWOOD is my first mainstream contemporary romance/romantic comedy/chicklit/women’s fiction novel.

The blurb best sums it up:

Shari Jones needs to get a life. Preferably someone else’s.

Single, homeless and jobless, Indo-American Shari agrees to her best friend’s whacky scheme: travel to Mumbai, pose as Amrita, and ditch the fiancé her traditional Indian parents have chosen. Simple. Until she’s mistaken for a famous Bollywood actress, stalked by a Lone Ranger wannabe, courted by an English lord, and busted by the blackmailing fiancé.
Life is less complicated in New York.

Or so she thinks, until the entourage of crazies follows her to the Big Apple and that’s when the fun really begins. Shari deals with a blossoming romance, an addiction to Indian food and her first movie role, while secretly craving another trip to the mystical land responsible for sparking her new lease on life. Returning to her Indian birthplace, she has an epiphany. Maybe the happily-ever-after of her dreams isn’t so far away? 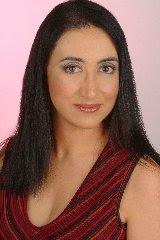 When she's not wri@ng she's busy raising her two liale heroes, sharing fine food with family and
friends, cheering on her beloved North Melbourne Kangaroos footy team and her favourite,
curling up with a good book!


Nicola loves interacting with readers. You can find her at:

To be in the running to win an E-book of BUSTED IN BOLLYWOOD, leave a comment answering this question:

If you had to choose a fantasy red carpet date, who would it be?