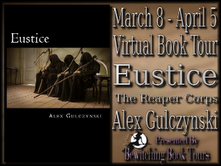 Hey all. Q-ball here, Alex Gulczynski's two month old son. Now I know what you're thinking. Really, I do. This bald and giant head in proportion to the rest of my body size not only makes me adorable but in true fantasy clichéd fashion it gives me telepathy. All babies have it. It is how we know when you are the most tired and we just happen to be wide awake. You didn't think that was a coincidence, did you? Maybe, you might think this is mean but hey, when you can't consciously control your limbs, you take what entertainment options you can get.

Anywho, moving on what you were thinking. You don't know who Alex Gulczynski is and you were thinking who is this guy and why should I care? Well, he's my Dad and a great guy but that probably doesn't make you care. What you care about is quality, thrilling, engaging storytelling, with some plot twists, interesting characters, and maybe a ghost or werewolf thrown in so things don't get too boring. And you are in luck, because Alex Gulczynski has a new book out that has all of that (minus the werewolves. I'm allergic anyway.) called, Eustice.

It's great and if I could read or focus my eyes, I would be reading it right now. The book follows the story of a teenage girl, Eustice P. Jennings (title make sense now?), who wakes up in a mysterious world and finds herself drafted into the dangerous Reaper Corps. She struggles to find her place and learn the rules of her new world while getting involved in the sinister cold war between the Angels and Demons, unbeknownst to her of course. She tries her best to survive, find allies and friends, but everything seems stacked against her. It's all very engrossing. If I could sit up I would have been on the edge of my seat as my Dad explained it to me.

Also, when my Dad isn't changing me, feeding me, or staring lovingly into my eyes he is finishing up the second book in this three part series, The Reaper Corps. So if you enjoy Eustice, which my telepathy tells me you will, you won't have to wait long for the next part.

Now that you're all curious about this fantastic book, my job is done. My Dad was supposed to write this post but he is past out asleep on the sofa. I tried to get him up so he could finish this but he mumbled something about being up at two and three and four AM because it was his turn last night. I don't know why he is so tired. I was up at those times and I'm fine. Maybe I'll go drool in his ear to get him up.

Thanks for reading this and check out Eustice. You'll like it.

Eustice P. Jennings awakens alone and confused on an ugly piece of office furniture in Purgatory. Being dead is the least of her problems as she is quickly drafted into the dangerous Reaper Corps and plunged headfirst into the endless conflict between Heaven and Hell. Friends and allies are few and far as Eustice struggles to find her place in a surreal world she never imagined could exist.


Eustice is Alex Gulczynski's debut novel. He is currently living in Seattle and teaching science to elementary students. He and his wife had their first child in December. He is using these sleepless nights to work on the next book to further the story of Eustice and Thayer. He hopes to have it out by March 2013.