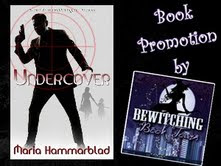 In the shadow of the cold war.

Thank you for inviting me to the blog today! From time to time, people ask why I wanted to write about a Russian spy. To those who are young today, the threat of Russia seems distant and unbelievable. It probably is, today. To people my age, who grew up in my part of the world, the shadow of Big Brother in the East will always linger.

I haven't been to Russia. I would like to go, but I'm a little afraid. When I grew up, the cold war raged - if a cold war can rage - and my home country Sweden rested in the shade of the Soviet Union, with Finland as a small buffer between us. News on TV showed women wrapped in layers of dark clothing to keep the chill at bay while they queued for hours for a loaf of bread. There were surely other sides of life in the Soviet Union as well, but these were the only images that reached me.

In 1981, we had a Soviet submarine allegedly making a navigation error. It was a navigation error alright; they went too close to the shore and were stuck with a large amount of submarine sticking out of the water. We were overwhelmed. The nation started at images of a gigantic foreign object - a nuclear sub - that spent time sneaking around the coast, spying on us.

I was nine and my imagination ran rampant. Who were the people on the sub? What did they look like? Did they like their lives? Were they happy?

A few years later, when I was 13, the innovation of cable TV reached my city. All of a sudden, our old TV set filled with images from other countries. There were music channels showing music videos around the clock, cartoons, and news. Fascinating! We also got one channel from the Soviet Union, in Russian. Everything on it seemed brown.

It wasn't black and white and it wasn't quite color. It was brown and white, like seeing through a sepia filter. I watched, without understanding even one word. There were a lot of people marching in long lines, and movies showing people frolicking in the grass, smiling just a bit too much. Most of the people in the movies looked like Swedish postcards from the 1930's.

I have no idea if this is what people in the Soviet Union watched, but it is what my pliable young mind took in.

As you can imagine, I grew up with a fascination bordering on fear. I wanted to write stories about Russia and Russian spies when I was a teenager, but mom said no. She claimed it was too dangerous. It probably wasn't, but her imagine was as wild as mine, and in her mind the threat was real.

By the time I finally got around to writing my story, the world had moved on. The Soviet Union is no more, and even if the country isn't exactly the west, it's nothing like in the 1970's. Stubborn as I am, I wrote about it anyway. =)

When Jenny Moore meets Alexei Roshenko, it's love at first sight. The tall, dark and handsome stranger appears to be the answer to every romantic fantasy any woman ever had. There is however more to him than meets the eye, and a dark and violent past is catching up with him. When Jenny decides to follow him back to Russia, she gets entangled in a web of deceit and secrets beyond her wildest imagination.