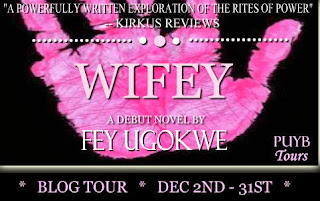 Wading in the (Salt)Water with Wifey

My little rum cake of contempo fiction,Wifey, a novella by the very bones of its facial structure, but novelesque in sheer textile length, was originally slated to be a short story--one that I had planned to sprinkle in as part of a fistful's collection of my just-inked, soul-parsing, socially-conscious shorts. But as my mind, fingers flew, the characters reached out, around, and grasping, ran off with me--their humanity and 21st-century pathos pushing me just past dear, sweet Convention and its nattily-clad entourage of stylistic limitations. And so the rest is, well, herstory--my shy but inchingly steely, easy-blushing and beautiful, Caribbean-blooded, Miami-born, virgin of a main character's herstory, and I suppose, as her willing, weary potter, mine too. Now, the nickname "wifey" I first frequently heard bandied lovingly about, seemingly several light-years ago, by a much younger, male cousin of mine--himself a graduated frat brother, and his wife the same a soror, just like the two main characters in my book--when either sugar- or sly-speaking to his equally effortless, twentysomething spouse. Hearing him cool-hurl the word up into the air like a crisp, fab firework--and being a woman who was specializing at that time in the highlighting and addressing of sociopolitical issues and disparities--it made me hmmm about some other households in the nation, wherein conversely, in those very same moments, the term "wifey" was instead perhaps being wielded, to demean, control, decidedly down-spirit. Since then, the moniker "wifey" has become a much more widely-used, pop culture reference to one's wife; seriously fab, gift-of-a-girlfriend; or a superlative, should-be-spousey stranger or acquaintance--thus triggering my memory in the now about that 'what if' I'd imagined, way back when. Complete that roux by folding in the beginnings of the recent domestic and world events of socioeconomic crisis; and stir in throughout a bold, galloping blend of the ever-fragrant, uniting-and-dividing grains, proteins, and spices that are food, race, money, sex, religion, chemical and fermented influence, and all things multicultural; and there you have steaming ready, beckoning, before you--in heaping paperback and digital form--the unique dish of a hopefully, filling, fiction read that is Wifey. I do hope it plays nicely about the eager-aching-curious mouth in your mind, and that the complex flavors of its queries and commentaries linger well on the tongue of your sociopolitical thoughts--long after you've digested its last startling, giggling, haunting, zinging, smacking textual bite. 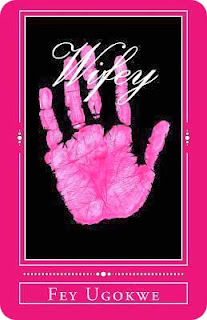 When life as a curiously paired, young married couple in California--in the midst of a growing state and national economic crisis--becomes literally unworkable, Rodney, an earnestly toiling, playboy of a husband, unilaterally determines that he and P.V., his ambitious but naive, exotic wife, should relocate to Texas. So P.V., a struggling sophomore realtor and avid foodie, and Rodney, a newly unemployed marketer and sports addict, sell virtually everything they own and embark upon a downsized existence in the heart of North Texas--Dallas. But an eerie and horrifying morning dream that P.V. previously experienced becomes a dark and ever-unfurling, pain-filled prophesy that ultimately threatens the very foundations of their humanity. Sex, depravity, despair, and an uneven pavement of good intentions lead to a black, one-way road with a shocking and hair-raising end.

Fey Ugokwe was born in Washington, D.C., to immigrant parents--one from British Guiana, South America, and the other from Nigeria, West Africa. She was subsequently raised in Pennsylvania, and attended both college and law school in Massachusetts. Fey is an attorney, and the founder of a socially-conscious media activity. At the age of three, she was taught to read and write by her maternal grandmother, a British-trained schoolteacher, and has been writing fiction and poetry since a child. She received her formal training in novel writing, genre fiction writing, contemporary fiction writing, and political fiction writing in Massachusetts, where her professors included renowned authors at the Massachusetts Institute of Technology. Her interests are, namely, in genre, contemporary, and political fiction, and she has a strong interest in uniquely combining the essences of the three, in order to highlight the underpinnings of the human experience.

Visit her website at http://www.pinkpurseinternational.net
Posted by SueFitz at 12:02 AM