Promo/Excerpt : Fix You by Beck Anderson 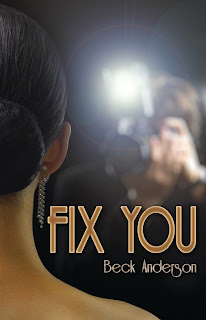 Links to the book:

When Kelly Reynolds’s husband died, he left her—the awkward, cautious one—to raise their two young boys. She’s pieced herself back together, barely. Now she takes refuge in her routine: running her kids around and running the trails near her Idaho home.

Two years after her husband’s death, a chance encounter on a run brings Andrew into her life. But Andrew is Andy Pettigrew, the Andy Pettigrew, famous actor. Kelly hates risk, and a love affair with Andrew is certainly tempting fate. She doesn’t fit into his Hollywood world. She doesn’t own a pair of Louboutins, and she couldn’t walk five paces in them if she did. Andrew oozes cool. She reeks of dork.

But despite this, they click. It may be inexplicable, but it works. However, it’s also becoming clear that Andrew struggles with the pressures of his fame. Kelly’s hold on a so-called normal life is already tenuous, and as much as she might want to indulge the fantasy, she doesn’t know how either of them is supposed to cope with stalkerazzi and tweet-happy fans with camera phones. She and Andrew both have secrets that seem impossible to keep.

Beck Anderson’s witty, engaging writing yields an emotional tale of love, loss, and all the little things that make up a life. In the end, what is it that really holds us together? Kelly must decide if love can fix two people who might be broken beyond repair.

“Miss Reynolds, you’re going to want to put on your sunglasses and look nonchalant. We’re about to throw your friend here to the wolves.”

Beck: I love this quote because Tucker says this. He’s the bodyguard in the story, and he’s one of my favorite characters. Also it’s a favorite because it captures what stardom means in today’s world – being famous is like being thrown to the wolves!
___

He’s hugging her. It looks like that, at least. It’s definitely him. The other figure is tiny, blond, vaguely resembles a yardstick. Must be her. The picture doesn’t bother me. The headline, on the other hand: THEY’RE IN LOVE!

Beck: This quote is a great example of Kelly, our protagonist, and her voice. She has a great head on her shoulders, and it’s fun to hear her thoughts.
___

Beck: I am a HUGE believer in the healing power of love. Love helps people stand up to situations that are unbearable. This quote gets to the root of that, and the root of Fix You’s story.
___

Life can crush you, ruin you, kill you.
Or it can break you and make you stronger in the process. You are strong, Kelly Reynolds. And you are strongest in your broken places.

Beck: Toward the end of the story, Andrew writes to Kelly, and here he shares something he realizes about her. I find the fact that he recognizes and values her strength to be terribly sexy.

Beck Anderson believes in the power of perfectly imperfect women and in the healing power of love. Her new novel, Fix You, grew out of those beliefs and the time to write afforded by the worst Thanksgiving blizzard she's ever witnessed in West Yellowstone.
For Beck, the path to published novelist has taken lots of twists and turns, including a degree in anthropology, a stint as a ticket seller at a ski resort, a much-loved career as a high school English teacher, and a long tenure as a member of the best writing group ever, hands down.
Beck balances (clumsily at best) writing novels and screenplays, working full-time as an educator, mothering two pre-teen males, loving one post-40 husband, and making time to walk the foothills of Boise, Idaho, with Stefano DiMera Delfino Anderson, the suavest Chihuahua north of the border.