Author Interview/Giveaway : On the Edge of Humanity by S. B. Alexander 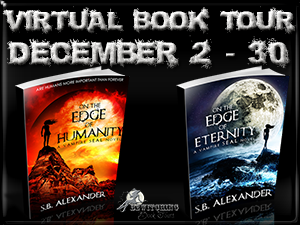 I’m a tomboy at heart, but I still like all the girlie things, although I don’t wear much make-up. That’s one thing I’ve really never gotten into. I love helping people whether it’s teaching or coaching individuals or teams of people. I do work in Corporate America in sales, and when I’m not working, I’m writing. However, since I travel extensively for my job, I do find time on planes and in hotels to write. It seems my best source of ideas come from me sitting on a plane or in a hotel. When I am home, I love to spend time with my husband and two Shih-tzus.

Growing up, my best friend and I used to make up stories and then chop the story up into scenes then act them out, engaging our friends in the neighborhood. We either wrote spooky stories or musicals. The scary ones were always fun.

I would say it took me about six months on each book.

At first it was a couple of times. However, the more I write and develop a routine, I find that I may add layers to a plot but not rewrite the whole storyline.

I usually run to the New Release section, unless I’m on a mission looking for a specific book.

Nancy Drew. She was curious, strong, determined and loved to help people.

7. State 5 random facts about yourself.
I served in the US Navy.
I’ve never had wisdom teeth.
I’m a former High School Math Teacher
My early childhood was spent in foster care.
I love the Boston Red Sox.

9. What are you currently reading?
Stained by Ella James

10. What is the best book you've read?
The Shining by Stephen King.

The Vampire SEAL series will have about six books in total. The next one in the queue is On the Edge of Destiny, which is halfway complete.

I’m also working on a separate series (non-paranormal) young adult romance based on a teenage girl whose dream is to play baseball.

The Vampire SEAL series follows Jo Mason as she embarks on her journey into a unique world of vampires and the paranormal. Her story begins when she learns she carries a dormant vampire gene, that if activated, could save her twin brother Sam, who is kidnapped by an evil cartel. The only problem is she has no idea where to find him until she meets, Lieutenant Webb London, a Navy SEAL who is part of a secret team of natural-born vampires. However, rescuing Sam may be the easy part. Now she must decide if her human life is more important than her twin brother. But that’s only one problem. She has many more as she battles the enemy, struggles with bullies, gets to know her estranged father and longs for her first kiss, her first date and her first high school dance.

The series is filled with tons of action, swoon-worthy characters, drama and the beginning of a budding romance. 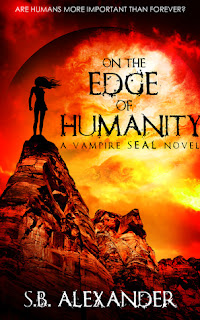 On the Edge of Humanity
A Vampire Seal Novel
Book One
S. B. Alexander

Sixteen-year-old Jo Mason is lost in a world where traipsing from one foster home to another is normal. She hates her life, she hates school and on most days, she hates living. If it weren’t for her twin brother Sam, she might already be dead.

Her normal world shifts one hundred and eighty degrees when she discovers her own blood tastes like candy and her eyes change colors like a mood ring. On top of that, her eyesight seems to be failing when she spies an otherworldly man, sporting bloodstained canines, who is trying to strangle a cop. The developments are shrouded when Sam goes missing between Anger Management class and History class.

She’s called to the principal’s office to meet Lieutenant Webb London, a Navy SEAL who is part of a secret team of natural-born vampires. His mission is to protect the twins from an evil cartel, but he’s too late. With Jo now under his protection, his team searches for Sam.

However, finding and rescuing Sam from the evil cartel may be the easy part. Jo learns she carries a dormant vampire gene that, if activated, could save him. As her normal world fades even more, pushing her closer to the edge of humanity, Jo must decide if her human life is more important than her twin brother.

With time as her enemy, she struggles to make a life-changing decision for both her and Sam.


For those of you who know me, you know the ‘S’ stands for Susan in S. B. Alexander. I chose to use my initials since there were a few Susan Alexander authors out there.

The one thing I like about reading a book other than the story is reading about the author. Who is he or she? And, how did they become a writer?

For me, it’s always been a passion to write a book. I love to transport myself into other worlds—ones where vampires and the fantastical exist. Where life is the playground for the impossible.

I created fantasy worlds at a young age as a way to deal with life. Yep, I had imaginary friends and talked to myself a lot. I was always creating, thinking, drawing and writing. I believe words are the key to opening the door to extraordinary places with amazing characters that tell a great story.

My life has had a colorful journey. After high school I decided to forgo college. I enrolled in a business program and graduated in ten months with a certificate that allowed me access to Cooperate America. But, somehow the idea to enter into an unknown world at nineteen-years-old was daunting. Instead, I decided if the world was my playground why not join the military, and so I joined the Navy. The four years in the military was a great foreground to learn about life and the world around me. But, as the cliché says, Life goes on.

I traded the military for college. I became a High School Math Teacher and loved it before deciding to revisit the one thing I was frightened of—Cooperate America. I’ve held many roles in the cooperate arena from sales representative to sales manager, but I never lost my passion to write.

When I’m not working my full time job, and plotting my next novel, I love to play golf with my husband, and spend time with my two dogs.

5 sets of signed print books, 1 and 2 in the series, and matching beaded bookmarks

Open to US Shipping 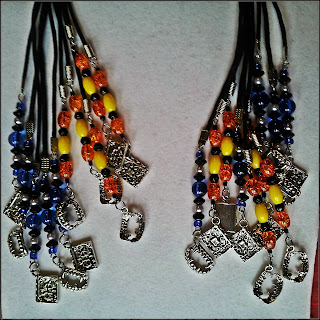