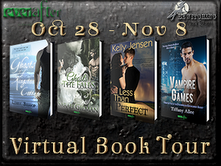 Mikayla thinks she's prepared for the day aliens land on Earth. She's not.

Mikayla and Reg are on the run from aliens who call themselves The People. The depopulated United States is not a safe place. Cities not held by The People are rife with gangs, the detritus of civilization, and disease. Mikayla, Reg, and their companions would like to find a farm to wait out the end of the world, perhaps start again. But on a mission to restock their supplies, Mikayla and Reg are captured by The People and prepared for the procedure that will make them perfect...and no longer human. It will take all their strength and trust to not only fight for their freedom, but to strike back.

Last night, someone asked me how I choose the names for my characters. Mikayla is a name I have wanted to use for a while. It means ‘princess’ and I think it has a really lovely sound. The diminutives are also pretty and cute. ‘Miki’ became ‘Mickey’ when Reg entered the story. In a scene, he sat himself down and started humming the Mickey Mouse song and Mikayla got herself a new nickname. I think it suits her very well.

She does not look like a mouse, but she thinks of herself as a small person. I remember my editor, Kaleen Harding, thinking this sounded like an insult and I suppose she’s right, in a way. Mickey doesn’t think of herself as insignificant, though. She just doesn’t take up as much space as everyone else. She’s about 5’2” and quite slender. Mournfully so, in her opinion. She doesn’t have enough bust or hip to wear sexy dresses, either. Her smallness is perhaps more a neatness, though. Mickey is super organised. She likes everything to be catagorised and catalogued. Everything must be in its place, which is why the end of the world is such a trying time for her. Neat freaks don’t do well in chaos. So, she had catalogued herself. She’s a small woman, who thinks of herself as fairly ordinary in a good sort of way. She’s not a rebel or s rock star, she’s content in her niche.

But, with flame red hair and freckles, Mickey is anything but invisible. Her quirky personality and strong opinions make her stand out, too. I see this discrepancy between her perception and that of those around her as a very natural thing. So often, we don’t really see who we are. Especially in our twenties.

I might be biased, but I think Mickey is a wonderful young woman. A little different, yes, but I’m going to say that’s a good thing. What’s important is that she finds herself in this story. Her strength. She left college two years before it all started, but in my story, she finally makes those last steps to adulthood as she finally takes full responsibility for herself.

Reg doesn’t like me talking about him. He’s not shy, he’s just very private. The first version of Less Than Perfect had a lot less Reg in it. I’m glad he really came out in the second and subsequent versions. He’s a really nice guy. I like writing nice people; it’s probably a bit of a fault of mine as a writer. I have a difficult time imagining really mean, twisted souls.

Anyway, Reg. He’s a former soldier who is obviously haunted by his time in the military. I think he wanted to serve, but didn’t always like what that meant. He’s a peacekeeper. His second career is much more suited to his personality. He loves being a mentor and a guide. He enjoys looking out for people.

Reg named himself, by the way. I’m not sure what Reg is short for, but I have a feeling it’s Reginald. I have a further suspicion that he is named for his father and grandfather. Possibly even his grandfather, making him Reg the third or fourth. Going to stop speculating, though, as he’s giving me one of those dangerous looks.

Reg is quiet, but capable. He doesn’t usually engage in unnecessary chatter, but he does like to talk. He’s fit (tall, dark and handsome) and is probably the sort of guy who watches what he eats, which would be annoying, but I think that’s part of why he and Mickey are drawn together. They both like to exercise a certain amount of control over their world.

Don’t we all, really?

I guess what I’m saying is that I think I’ve written two really human characters. I hope my readers agree!

When I first signed with Entangled, I was very excited about my project. I wanted to bring Reg and Mikayla to life. So, I commissioned a friend of mine, talented artist, Kay Steele, to paint them for me. The scene depicted is from close to the end of the story and she painted it after reading the last two chapters (in serious draft form, poor woman).

Lips twisting, I studied Reg’s face for the space of a breath. He had irregularly regular features.

Masculine, all angles and planes, a slightly crooked nose, mouth touch too narrow, ears on the large side. His dark-brown hair flopped across his forehead in an endearing manner and he had dark lashes and a square jaw lined with three or four days’ growth. A handsome man, by all accounts, by the sum of his parts. Not like them, who were regularly regular, all pleasing in their perfection and not quite real.

“Did you think about taking their deal?” I asked.

Reg began to shake his head, then paused. “I guess I did, for a second.”

His honesty plucked at something in my chest. I liked that he was able to admit a fault. It made him real.

His blue gaze swept over my face. It didn’t feel as if he lingered on my freckles, or tried to count them.

“What about you?” he asked.

Heat crept across my cheeks, partly at his scrutiny, mostly because I didn’t know if I could be as honest.

The People offered perfection. Anyone who joined them could be rebuilt from their toes to their hair follicles. They had a cure for baldness, and tinea. There was a price for those perfect bodies, though, something out of a macabre gothic horror novel. Perfection cost no more and no less than a soul. No one noticed the difference at first. I think they were happy.

I had considered accepting the bargain; most of us did, even if only for a minute. When I thought of those skirts that should stop above my knee, the blouses with boatnecks that bared a hint of cleavage, legs long enough to look sexy in heels, I thought about trading up. Taking a job with The People, giving them myself for perfection.

Lifting my shoulders in a small, not quite careless shrug, I offered an affirmative sound and looked away. Don’t know why I felt so embarrassed; shame had little place after the collapse of civilization.

Here we were, unwashed, tired, and hungry, walking from A to B with nothing but four backpacks and a box of books.

An arm brushed mine in a less-than-gentle nudge and I looked up.

A wobbly smile tried to overtake my lips. I fought against it, then gave in.

Reg’s lips curved in return. “That’s better,” he said. “Your face is made for smiling.”

Not sure when he decided that, but I liked the idea that he’d been studying my face as intently as I had his. My smile widened. So did his.

If aliens ever do land on Earth, Kelly will not be prepared, despite having read over a hundred stories of the apocalypse. Still, she will pack her precious books into a box and carry them with her as she strives to survive. It’s what bibliophiles do.

Kelly Jensen lives in Pennsylvania with her husband and daughter. When she’s not busy being a mom, Kelly spends her time volunteering at the local library, playing video games, and studying Kiryoku, a martial art combining Shotokan, Aikido and Tang Soo Do.

Less Than Perfect is her first book.