Character Guest Post/Giveaway : Weak at the Knees by Jo Kessel 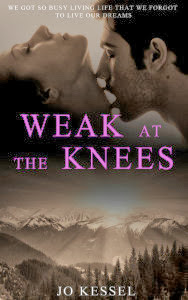 DANNI LEWIS – HEROINE FROM WEAK AT THE KNEES.


Cooking, that’s a way to a man’s heart isn’t it? Well, that’s what my Polish grandma has always told me. She’s a brilliant cook. Everything she creates (apart from HER Borscht soup) is simply divine – I’m telling you, she could turn her lounge into a trendy pop-up restaurant and people would pay good money to eat there. She makes the best cheesecake in the world.

Anyway, back to the kitchen. My colleague Gina who works with me as a ski rep in the French resort of Montgenevre was given a cookery book by the chef of her hotel. It’s called Sauces for Seduction. All recipes are designed to snare a man. She’s already tried one of them out – a combustible concoction of carrots with aniseed. And yes, it worked a treat. The man she cooked for was successfully seduced, although the carrots (truth be told) tasted woeful.

Now it’s my turn to work magic with the cookbook. I’m also trying to seduce. I’m convincing myself otherwise and pretending that this is a meal between ‘friends’. Anything more would be delusional, because much as I’m attracted to him (he’s French and called Olivier) I can’t have him. He’s already taken. Married, very married, with a gold band adorning his left forth finger.

I’ve always vowed never to commit adultery, and so, as I thumb through the recipes, I know it’s a pointless task. I shouldn’t even be having Olivier around, let alone cooking him dinner. It’s asking for trouble. Only he was so lovely to me the other day. We bumped into each other in a blizzard and he took me back to his place, a fabulously parochial converted barn in the middle of a huge field, where he worked his way to my heart by cooking. Well, ok, it wasn’t proper cooking. He made me a hot chocolate. But it was a clever recipe – he melted a thick bar of chocolate and stirred it into warmed up cream. It was truly sensational.


Unlike Grandma, I’m a lousy cook. Most of the sauces in the book are sure to flop if I try my hand at them. Hum! Could I manage a Bechamel sauce? No way. What about an asparagus sauce with a fancy emulsion? Forget it………………………Here we go, apparently eggplant used to be considered the ‘apple of love’ by the Romans. I love eggplant. I even have my own recipe which I devised whilst I was studying at University. So I think I’m going to ditch the book and make my own tomato aubergine sauce which I’ll dish up with some pasta and shavings of parmesan. Perfect. Not too fancy. And everything (bar the pasta) can be prepared ahead of time.

Why do I care so much anyway? Olivier is married and seduction is a very bad idea - perhaps the worst one to ever flit through my head. I should stay working on my laptop writing this instead of heading out to the shops to stock up on ingredients…….but perhaps some fresh air would be nice. And it would be rude to cancel now. No, we’ll just go ahead and I’ll be strong and resist temptation. As if the aubergine apple of love sauce is going to work anyway – what a ridiculous notion!


Author Bio:
Jo Kessel is a journalist in the UK, working for the BBC and reporting and presenting for ITV on holiday, consumer and current affairs programs. She writes for several national newspapers including the Daily Mail, the Telegraph, the Guardian and the Express and was the anonymous author of the Independent’s hit column: Diary of a Primary School Mum.

When Jo was ten years old she wrote a short story about losing a loved one. Her mother and big sister were so moved by the tale that it made them cry. Having reduced them to tears she vowed that the next time she wrote a story it would make them smile instead. Happily she succeeded and with this success grew an addiction for wanting to reach out and touch people with words.
P.S Jo’s pretty certain one of her daughters has inherited this gene.

Other books by Jo Kessel include Lover in Law.
Visit her website at www.jokessel.com