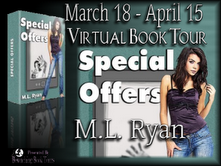 Little Blurb about yourself:
I am a profes¬sional woman — not that I gave up my amateur status, but rather I am over-educated with a job in which I spend a lot of time writing dry science non-fiction. In an effort to strength¬en the less logi¬cal side of my brain, I decided to write some of the many stories rolling around in my head. I live in Tucson, AZ with my husband, son, four cats, two dogs and two adopt¬ed desert tortoises.


1. Who or what inspired you to become a writer?
I wrote my first book when I was seven. It had something to do with an enchanted pony and the decline of the Ottoman Empire. It languished for many years, hidden in my dresser, and was rejected repeatedly by publishers who didn’t understand its inner meaning. Or the generally incoherent sentence structure and plot arc. More recently, I was inspired by the resurgence of paranormal-based books, as many of my ideas involve supernatural elements.

2. How long did it take you to write Special Offers?
It took six months of writing in the evenings and on weekends (damn day job).


3. While writing how many times do you go back and rewrite a plot?
I don’t rewrite the plot that much. Sometimes, though, a new twist comes to me and I have to change some of the earlier details to fit. In general, however, I know the basic plot line before I start writing.


4. You run into a bookstore, where do you go first?
Urban Fantasy. Then Sci-fi. Then Starbucks.


5. How many books in a month do you tend to read?
Unfortunately, I read less now that I am writing, but I still read between four and six a month.


6. In all the books you've read. Who is your most favorite character and why?
That’s tough. I guess I’d have to say Kate Daniels. She’s self-sufficient, fearless and has a whole lot of family issues. All of which make her incredibly interesting. And who wouldn’t like a lion for a significant other?

7. State 5 random facts about yourself.
1. I have a geographic tongue.
2. I have a Ph.D. in Immunology.
3. I despise hazelnuts.
4. I can identify almost every species of warbler that is normally found in the US by their song.
5. I’m teaching my tortoises to come when they are called.

8. Your favorite Genre?
I like paranormal romance, as long as the romance part isn’t too laden with soul mates or instantaneous love connections. But I think vampires, shifters and such are fascinating to read about.

9. What are you currently reading?
I am reading The Lost Dragon by Drako.

10. What is the best book you've read?
It’s a tie between J.R.R. Tolkien’s The Lord of the Rings Trilogy and George R.R. Martin’s A Storm of Swords. I must be drawn to books written by guys with repeating middle initials.

11. Any new projects coming up?
Special Offers is the first book of the Coursodon Dimension Series. Book two — Special Rewards — was just recently published and I’m hard at work on book three.

I’ll give you my elevator pitch: Special Offers is about a woman who is possessed by a magical being from a parallel dimension who was previously trapped in her Kindle. It’s a combination of urban fantasy, paranormal romance and sci-fi with a lot of quirky humor. I hope your followers will give it a try. I think they will like it!

As soon as Hailey Parrish discovered her husband was cheating with her co-worker, she swore off men. She had to find another job when her boss went to prison for being a pimp in his spare time. Three years later, Hailey still hadn’t gone on a date and she milks chinchilla for a living. Her life is about to get weirder.

While in pursuit of inter-dimensional miscreants who use their arcane powers to prey upon humans, Sebastian Kess was ambushed and mortally wounded. To save his life, he used his own magic to convert his soul to binary code and transfer it into Hailey’s soon-to-be shipped Kindle eBook reader. When Hailey inadvertently releases him and he inhabits her body, she finally has a man inside her, just not in the way she imagined.

Hailey must come to grips with the existence of the parallel dimension of Coursodon and the realization that magically inclined non-humans walk the world while dealing with Sebastian’s arrogant banter in her head. Her predicament also introduces her to another supernatural, the handsome could-be-the-man-of-her-dreams Alex Sunderland. The action moves from Hailey’s hometown of Tucson, Arizona to New England and across Europe as she and Alex try to return Sebastian to his own body while staying one step ahead of the criminals who want to keep him where he is.

M.L. Ryan is a profes¬sional woman — not that she gave up her amateur status, but rather that she is over-educated with a job in which she spends a lot of time writing dry science non-Fiction. In an effort to strength¬en the less logi-cal side of her brain, she decided to write some of the many stories rolling around in her head. She lives in Tucson, AZ with her husband, son, four cats, two dogs and two adopt¬ed desert tortoises.