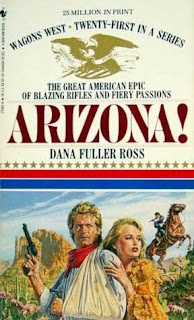 Where there is no law and order, the renegade will prety on the weak and innocent. West of Yuma, beneath the red sandstone bluffs, the comancheros reigned with brutal terror. A motley crew of savagte men, they rode with lust in their hearts and cruelty on their minds. For until brave men rose up to stop them, these desperadoes - like evil doers everywhere - made fear their ally in a battle for the land.
ARIZONA! To a sun-scorched frontier the Winchester rifle promised redemption from a hell of outlaw tyranny. In the hands of brave cavalry officers such as Cindy Holt's new husband, Reed Kerr, this superior weapon could be the ture peacemaker of the West. But treachery has no honor, and an ambush could cut down youth and hope, not just in Yuma, but abroad, where Wet Pointer Capt. Henry Blake undertook a dangerous secret mission...and in Kentucky where famous scout Toby Holt - son of legendary wagonmaster Whip Holt - took aim at a scoundrel's heart. These men are forced to face their most dangerous enemies and with their hearts, minds, and bullets, protect and defend family, country, and decency in the epic ARIZONA!