Author Interview: The Life and Times of the Heir and the Keeper by Etta King 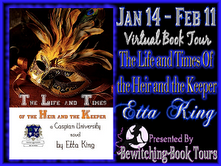 They say college is a lot of things; a haven, a four-year party, the place you met the girl – or guy – of your dreams. What they don’t tell you is, the best part of college is the drama YOU bring to the table! After all, that dirty little secret, that not-so-little white lie, and those texts you wish you could erase from cyberspace can’t stay hidden forever. At CU, someone’s always watching, and you better hope there isn’t a camera phone on hand when you get caught.

It’s the Spring Semester, but it’s not all fun in the budding sun for Jon and Franz. Follow them as they delve through the politics of secret societies, the inevitable drama of the F-word (that’s FAMILY, for the uninitiated), creepy Resident Advisors, creepier residents and girls who don’t always say what they mean. Who wouldn’t need two months to recuperate?

Etta King is the author of the Caspian University novels, a series chronicling the life and times of a group of wealthy teens who inevitably discover the various flavors of college drama. Etta writes from her personal experiences as a college co-ed and as the product of an all-girls prep school. Here she witnessed the very eccentricities and foibles which she depicts in her novels.

In a home filled with books, it was no surprise that Etta grew to be an avid reader, and that translated into writing when she was thirteen. She wrote simply for the fun of it, whatever would come to mind, from fantasy to thriller to romance, and shared her stories with her friends.

In 2010, at twenty-one and just as she was about to graduate from college, Etta began writing "The Life and Times of Elizabeth and the Duchess." This was a story which had first taken shape in 2008, after her freshman year, but had been put on hold. With graduation looming, Etta recalled the characters, and the events which had inspired them, and took pen to paper. Literally, as Etta enjoys writing out her stories before typing them out. Soon the first book had been completed and the series was born.

"The Life and Times of the Heir and the Keeper," comes as the sequel to "Elizabeth and the Duchess," and serves as the second semester of these teens' college saga. Etta is currently working on the third book, in what will be an eight-part series.

Etta King lives with her family in Westchester, New York.