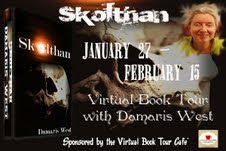 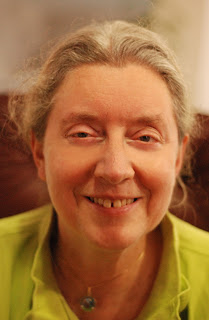 Damaris
West (née Damaris Naylor) has been writing almost for as long as she
can remember, cutting her teeth on atmospheric poems and ferocious
little stories about her own fictitious exploits.
Although
her family home was in the heart of Cambridge, UK, hers was
none-the-less a rural style of upbringing in which natural history
was of immense importance. Of her immediate family, Damaris was the
only non-scientist.
Damaris'
first novel, 'Wild
Goose'
(available as part of a compendium with her third novel), drew
inspiration for its setting and details from her autobiography, and
reflects her own struggle to break away from the family mould. Her
second novel, written in time wrested from the demands of running a
tuition agency with her husband Clive, is one of fantasy and called
Skolthan
after the magical and Eden-like island that it describes. Her third
novel, 'Queen
Anne's Lace',
depicts the complex interrelationships of a family (not altogether
dissimilar to her own) when their values and desires are brought into
sharp relief following a change in circumstances.

Apart
from novels, Damaris has written poetry, short stories and articles,
some of them commercial. One short story for children has been
published separately and is called The
Talking Tree.
She
currently lives in Umbria, Italy, in a rebuilt farmhouse with her
husband and three dogs, all Italian rescue puppies. She divides her
time between writing and tending her garden which is in constant need
of protection from the ebullient native plants and insects. She
writes a daily blog about her adventures –
http://italyhouse.wordpress.com
Some
of these anecdotes have been turned into a short book about living in
Umbria called ‘A
Postcard From Umbria’.
It contains many of her own photographs.
You
can see all the books which she has been involved with at
www.anysubject.com
Damaris’
hobbies include playing the violin, gardening, photography and
reading.
Blog
| Facebook
| Facebook
Fan Page
| Any
Subject Books Publishing 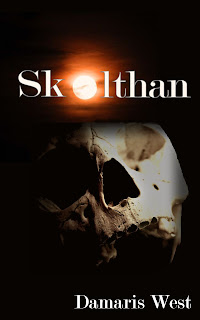 Hilda, loner and wise woman, possesses
secret knowledge which allows her to access a paradise world called
Skolthan. Her warlock ex-husband Joshua, unable to extract the
knowledge from her during their marriage, has allied himself with a
midwife called Alice who is in reality a powerful black witch.
Together they devise a plan to enter Skolthan by storm, in spite of
Hilda, and use it as a springboard for reaching and perverting the
rest of the universe.

When a homeless girl called Camilla
turns up on her doorstep, Hilda takes her in, unaware that this is
part of her enemies' plan for spying on her. Camilla has been raped
and is pregnant with a child whose sacrifice is intended to provide
magic power for breaking into Skolthan.

Camilla is forcibly conducted by her
manipulators to a bleak winter shore for an induced birth. Hilda
meantime has rallied her few somewhat eccentric friends for a rescue
mission. Together they prevent the invasion of Skolthan and subject
Alice to a grisly death.

There
is to be no conventional happy ending, however: Camilla's ordeal has
been too much for her. But happiness has many different guises.

Excerpt
One:
A naked, flame-like body
shining pale in the centre of a ring of shadowy figures. One might
have expected it to look vulnerable, to have the air of a sacrificial
victim, but it gave quite the opposite impression. In part due to her
stature, in part to a natural charisma, Alice seemed to be in total
control of those sinister figures. With a great dramatic gesture,
throwing back her head, she now pointed to another person in the
circle who immediately began to undress, the garments being retrieved
by the figure to the right in the same way as before. This time the
naked body that emerged was that of a younger woman, with full
breasts and a dark triangle of pubic hair. I looked closely at her
face but didn’t recognise her.
Before the second figure
had scarcely discarded her last item of clothing, Alice had made a
gesture towards a third who responded also by undressing. Then while
this one was still slipping off the last garments, she pointed
towards a fourth. It was an amazing spectacle. All fourteen of the
figures eventually took off their clothes, but the instructions to do
so came at gradually decreasing intervals so that the whole
performance gathered speed like a catherine wheel.
I glanced sideways at
Dick once or twice during this display; his eyes were nearly popping
out of his head. All the naked figures were female. Some were young,
though most were mature and some even elderly - one or two
considerably older than Alice. All of them, however, even the most
wrinkled and saggy, shared a certain self-confidence which I guessed
was the result of just such activities as this. I looked as hard as I
could, but I didn’t recognise anyone else.
Once all the women were
naked, Alice bent down and picked up what looked like a pot or crock
from beside her. She took it to each member of the circle in turn,
holding it for them while they dug a finger in the contents and put
the finger straight up between their legs. Each woman rubbed her
hands together and wiped the substance all over her body, now and
again dipping back between her legs for more. A dim, dim memory came
to me of having read of this sort of thing: witches introducing
hallucinogenic ointment vaginally to enhance the effect.
After that, Alice took a
place among the others in the circle and they all began silently
dancing, accompanied only by the hiss and sigh of waves sliding up
the shore beyond them. Without music, and without being able to see
each other (their eyes were closed, I noticed,) they somehow managed
to achieve a fundamental unity in their dance. They writhed with
their arms stretched up and their heads bent back. Their bodies
swayed like flower stalks in the wind. The dancing began slow and
stately but grew faster and faster, wilder and wilder, until the
entire group was thrashing back and forth like weed in a turbulent
stream. Eventually, as if their power came all from the one source,
they began to slow. They came to a standstill, one after the other,
in different poses, stayed thus for a while, then opened their eyes
as if coming round from a trance. I found myself envying them. Why
had I never done something like that on a wild, moonlit shore?
Follow The Tour 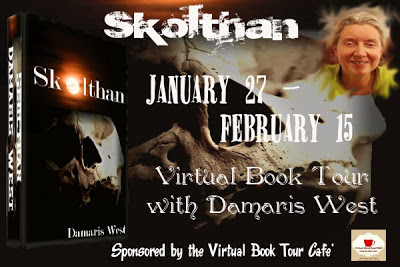