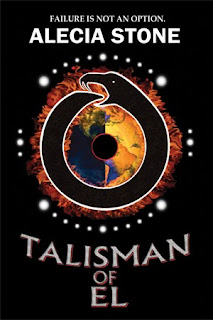 Talisman of El by Alecia Stone

WHAT IF YOUR WHOLE LIFE WAS A LIE?

When 14-year-old Char­lie Blake wakes up sweat­ing and gasp­ing for air in the mid­dle of the night, he knows it is hap­pen­ing again. This time he wit­nesses a bru­tal mur­der. He's afraid to tell any­one. No one would believe him ... because it was a dream. Just like the one he had four years ago - the day before his dad died.

Char­lie doesn't know why this is hap­pen­ing. He would give any­thing to have an ordi­nary life. The prob­lem: he doesn't belong in the world he knows as home.

He belongs with the others.

Alecia Stone is the author of Talisman Of El (Centrinian, 2012), the first book in the Talisman Of El trilogy. She graduated with a BA in Film & TV and has worked in television for a short period of time before branching out into storytelling. Alecia loves anything and everything paranormal. Her fascination with all things supernatural sparked her obsession with books, particularly young adult fantasy fiction, which she has never grown out of. She was inspired to become an author after reading Pride and Prejudice by Jane Austen at the age of fourteen.

In 2008, Alecia started working on Talisman Of El, a contemporary young adult fantasy fiction inspired by people who disappeared mysteriously, including, but not limited to, Amelia Earhart and Percy Harrison Fawcett, who went on an expedition in search of an ancient lost city. When she isn’t writing, she enjoys going to the movies, listening to music, and travelling.

Talisman Of El is her first novel. At present, Alecia lives in England, United Kingdom with her family.

3 Print copies of Talisman of El