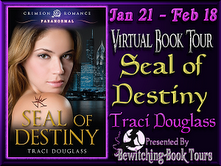 Traci is a Midwest native. She is the author of Paranormal Romance/Urban Fantasy & Contemporary Romance. Her debut novel, Seal of Destiny, was published with Crimson Romance in January 2013. The second book in her Seven Seals Series, Seal Of Surrender, will be released by Crimson Romance in May 2013. She is an avid animal aficionado, sappy quote lover & more than occasional smartass.

Being an only child, I’ve made up stories to entertain myself for most of my life. It never occurred to me to write them down until I had a dream in November 2011. The story and characters refused to leave me alone until I put them down on paper. Poof! A writer was born.

I wrote the first draft of what would become Seal Of Destiny in about one month. (see story above). I then spent about six months editing the piece and honing my craft.

I usually go through three editing passes. The first on my own, for plot, grammer, punctuation, etc. The second after I receive the work back from my awesome critique partners. And the third with the publisher once they contract the piece.

Between required readings for my MFA, books I review for author friends, and those I read for fun, I’d say three, on average.


Hmm. Good question! I’m quite partial to Elizabeth Bennett in Pride and Prejudice.

I’m a Virgo.
My favorite color is blue.
I don’t kill bugs. (I catch them and put them outside. Except for centipedes. Hate those.)
I can’t eat food with faces on it or those shaped like people or animals.  (A source of great amusement to those who know me.)
My favorite season is Spring.

Jane Eyre by Charlotte Bronte, All Over The Place by Serena Clarke

The second book in my Seven Seals Series will be available from Crimson Romance in May 2013. I’m getting books 3 and 4 in the series ready for submission. And, for my MFA thesis project, I’m trying my hand at a new paranormal romantic suspense detective series. Think Joss Whedon meets Castle, without the vampires.


I think the book’s blurb sums up the story the best.

Love conquers all… but can it stop the Apocalypse?

Mira Herald is having the worst life ever.  Not only is she plagued by horrific nightmares starring the Devil himself, she’s now the target of a power-hungry, rogue minion, freshly sprung from Hell and bent on her destruction.  To complicate matters further, she’s acquired a stalker. One who insists he’s a divine warrior sent for her protection because she houses an ancient relic with the power to unleash Armageddon. Last time Mira checked, she wasn’t insane. Still, all this celestial mayhem is enough to drive a girl crazy.

Kagan is a member of the Scion, an elite team of immortal warriors selected by Divinity to aid mankind and save the world. After a century alone, Kagan is summoned for a new mission. He’s eager to begin. Eager until he’s informed his mission consists of protecting a woman with no clue to the power she wields. Plus, his briefing fails to prepare him for his new target’s cosmic-sized attitude problem.  As Divinity’s sworn servant, he’s required to fulfill his duty. His oath, however, does not require him to be enthusiastic about his new assignment or warm-and-fuzzy toward his new compatriot. He plans a wham-bam rescue and a quick return to solitude.

The minion attacks—with the backing of a mysterious organization—and all Hades erupts, putting a fast end to any whirlwind escapes. Accustomed to staunch independence, Mira’s survival now requires full cooperation and an unwavering belief in Kagan. The battle-hardened warrior is also forced to chose: between duty and desire. Amidst the turmoil, Kagan and Mira’s undeniable passion draws them closer to each other and down a path neither expected but both yearn for, more than they ever knew.

Will love save the day? The world’s fate depends on the answer.

“Basta!” Kagan grabbed her by the arm and twisted slightly, not enough to hurt, but enough to let her know he meant business as he directed her to a corner booth. He ignored the half-full beverages and coats scattered on the seats and shoved Mira into the confined space. When the booth’s original owners took issue with his hostile takeover, Kagan dispatched them with a lethal glare. He wasn’t sure where the girl had gotten the idea his mind was damaged, but he was damn sure he didn’t like it. He moved in behind her to block her escape.

“Oh, hell, no!” After several unsuccessful strikes to his muscled physique, Mira tried to slide out beneath the table. The angle proved too awkward. Defeated, she shoved as far away as she could into the corner and propped those killer boots on the seat in front of her in warning. “You better let me out of here, asshole, before I call the cops! I caught you stalking me, pervert!”

Kagan took a deep breath. He never lost his cool in battle, and he wasn’t about to start now. “Pervert? You’re of age, si?”

Mira glared. Kagan ticked through their earlier interactions, searching for a reason behind her intense hostility. His preternatural instincts sensed her intention before her hand reached his carotid. He blocked her quickly, locking her small hand within his and forcing it to the table beneath his own. Her pulse raced against his palm. He took another swig of beer then flashed his most endearing grin. “Let’s start over.” He released his bottle and extended his hand. “I’m Kagan.”

She refused to acquiesce. Kagan spoke in quiet tones meant to calm, to reassure. “I know I’m a stranger, but we have things to discuss.” He glanced around the crowded club, at the bodies packed tight. “We can’t do it here, though—no privacy. My apartment is close. Why don’t we go there and talk?”

Mira kicked him hard in the thigh.

“Merda!” Kagan grabbed his throbbing leg. “What’s in those damn boots? Marble?”
“Let me out of here, jackass, before I sideline your baby-maker!” Mira struggled within the tight confines of the booth. As she squirmed, the spicy scent of her shampoo wafted, and he was overcome with the strangest urge to plunge his hands into the riotous mass of her hair, to feel it curl around his fingers. She tugged on the hand pinned beneath his, and his thumb traced over her thudding veins. His heart pounding along with hers. The odd tingle sped through his torso, and his mouth turned to cotton. Her gaze blazed up at him, a swirling mix of green and golden brown. He noted the dark smudges below and wondered what kept her from slumber.

Dolce Cristo! Kagan looked away, fought for control. This was getting way out of hand. He couldn’t remember the last time he’d bedded a woman, but apparently it had been far too long.


Traci is the author of paranormal/urban fantasy and contemporary romances featuring a sly, urban edge, including her current Seven Seals series. Her stories feature sizzling alpha-male heroes full of dark humor, quick wits and major attitudes; smart, independent heroines who always give as good as they get; and scrumptiously evil villains who are—more often than not—bent on world destruction. She enjoys weaving ancient curses and mythology, modern science and old religion, and great dialogue together to build red-hot, sizzling chemistry between her main characters.
A storyteller since childhood, she began putting her tales down on paper in November 2011 after the idea for the Seven Seals Series occurred to her in a dream. She finished the first draft of what was to become Seal of Destiny in one month and decided to pursue a full-time writing career in January of 2012. Life has now been a rollercoaster, crash course in pursuing your dreams.
Traci is an active member of Romance Writers of America (RWA), Indiana Romance Writers of America (IRWA) and Fantasy, Futuristic & Paranormal Writers (FF&P) and is pursing a Masters of Fine Arts degree in Writing Popular Fiction through Seton Hill University. Her stories have made the final rounds in several RWA chapter contests, including the 2012 Duel on the Delta, the 2012 Molly Awards, and the 2012 Catherine Awards. An earlier draft of Seal of Destiny won the paranormal category of the 2012 Marlene Awards sponsored by the Washington Romance Writers.
Other current projects include upcoming books in the Seven Seals series and a new futuristic detective series with hints of the paranormal and plenty of romance.