The idea for PLAGUE sprang from, ironically, a nonfiction book: Richard Preston’s 1994 spine-tingling best seller about the Ebola virus, THE HOT ZONE. As I read Preston’s book I became fascinated by Ebola and, quite frankly, scared to death by the thought there might be an airborne version of it. Thriller writers, naturally, love things that scare folks. So, I began thinking about how I could turn my fright into a terrifying novel.

Not really. I try to avoid "message" novels and stick to entertainment. I want readers to keep turning pages, get a "thrill" out of the book and maybe learn a few things--I write science-fact not science-fiction.

The hardest part is outlining the story, conceptualizing a tale that will keep readers engaged. I don't prepare a detailed chapter-by-chapter outline, but I do like to have a handle on the opening scene (the hook for the reader) and the conclusion, plus several key scenes in between. With that sort of broad strategic plan, which probably isn't more than a couple of double-spaced, typewritten pages, I can sit down and begin writing. But--and this is why it's hard--it may take several months of thinking and jotting down notes before I have a usable outline.

The actual writing is the easiest part. It's what I call the tactical side of my writing: fleshing out in detail my strategic vision. Although I know I need to get from point A (the beginning) to point B (the ending), I never know precisely how I'm going to get there. That is, I don't know exactly what my characters are going to do or say in any given scene until I'm actually typing the words. Sometimes I'm surprised. Sometimes my characters get into situations that force me to change my outline, which, by the way, I consider a "living" document.

I've just completed the first draft of my third novel, SUPERCELL. It's a drama set against tornado chasing on the Great Plains. I guess you could say I'm returning to my "roots," writing another meteorological thriller in the same vein as EYEWALL, my debut novel.

Why did you choose to write for that specific genre?

I've always enjoyed reading thrillers, especially novels dealing with spies and espionage. It's escapism, I suppose. I know nothing about being a spy or what it's like to lead a life pretending to be someone you're not, but those sorts of endeavors always seemed pretty "thrilling" to me. Novels on those subjects always kept me turning pages. So those were the types of books I wanted to author: page turners. I knew I couldn't write about spies, however. So I turned to subjects I was more comfortable with and ended up producing works in the "science-fact" realm I mentioned earlier.

Most of my novels will have a meteorological element, since my background is in atmospheric science. But I felt comfortable and excited branching into microbiology for PLAGUE.

Wonderful. It means I've achieved some measure of success. It means I've kept someone --hopefully, a number of someones--turning the pages of my previous novels.

"Do bad reviews bother you?"

Of course they do. But they're part of the business, and I've learned not to take them personally. As a published author, you're going to get negative reviews . . . hopefully, not too many. There seem to be three kinds of negative reviews: (1) those that contain constructive criticism (which I will, in fact, evaluate); (2) those that are mean spirited or curt (which I brush off immediately), and (3) those that have nothing to do with the writing per se, e.g., complaining about the book's price or kvetching about the fact it wasn't the type of novel expected.

Long and arduous. It took ten years and four different manuscripts before I became a commercially published novelist. It's not an endeavor I'd recommend unless you're as stubborn as a mule and have the tenacity of a tick. 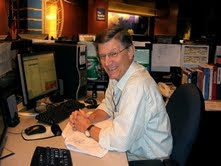 H. W. “Buzz” Bernard is a writer and retired meteorologist. His debut novel, Eyewall, which one reviewer called a “perfect summer read,” was released in May 2011 and went on to become a best-seller in Amazon’s Kindle Store.

His second novel, Plague, came out in September 2012.

He’s currently at work on his third novel, Supercell.

Before retiring, Buzz worked at The Weather Channel in Atlanta, Georgia, as a senior meteorologist for 13 years. Prior to that, he served as a weather officer in the U.S. Air Force for over three decades. He attained the rank of colonel and received, among other awards, the Legion of Merit.

His “airborne” experiences include a mission with the Air Force Reserve Hurricane Hunters, air drops over the Arctic Ocean and Turkey, and a stint as a weather officer aboard a Tactical Air Command airborne command post (C-135).

In the past, he’s provided field support to forest fire fighting operations in the Pacific Northwest, spent a summer working on Alaska’s arctic slope, and served two tours in Vietnam. Various other jobs, both civilian and military, have taken him to Germany, Saudi Arabia and Panama.

He’s a native Oregonian and attended the University of Washington in Seattle where he earned a bachelor’s degree in atmospheric science; he also studied creative writing.

He and his wife Christina live in Roswell, Georgia, along with their fuzzy and sometimes overactive Shih-Tzu, Stormy.

Deep in the secret recesses of a Cold War lab, the Russians created tons of deadly bio-weapons. Now, decades later, a protege of that Russian research is about to release weaponized Ebola into the heart of the South's most iconic city: Atlanta, where the symbols of American "decadence" range from a happily diverse population to the Coca-Cola museum and CNN headquarters.

A preliminary test of the horrifying virus demonstrates the unspeakable suffering of its victims--and alerts the Centers for Disease Control that a terrible pandemic is in the making. CDC Virologist Dr. Dwight Butler begins a frantic effort to track down the source of the virus before it's too late.

For new BioDawn CEO Richard Wainwright, it quickly becomes clear that the "accidental" plane crash that killed the pharmaceutical company's entire executive hierarchy may have some connection to the evolving threat. Suddenly, Richard is being stalked by a hit woman. He and Butler join forces to find the lone terrorist at the center of a plan that could unleash the Black Plague of the 21st century.

David Gullison stared into the bathroom mirror, terrified by what he saw. Someone he didn’t know, someone he’d never known. There was something almost demonic about his image. His eyes swam in crimson. Dead rubies. His face, flushed and splotched with tiny scarlet blooms, gave the appearance of Edelweiss gone bad. He looked the caricature of an aged, hard-drinking Irishman. But he knew it wasn’t age or booze. It was much worse than that.

The pain came again, squeezing his gut, wrapping around his chest. It had started suddenly a couple of days ago. At first it was just his back. “Too much golf,” his wife said.

“No maybe. I warned you. Take it easy. You’re retired now.”

Then the fever had come, boiling up inside him like a pyroclastic flow. His throat felt as though a cheese grater had been dragged through it.

“Yes,” he said. He’d flopped down on his bed and didn’t move for twelve hours. It was unlike any flu he’d ever had. He felt as if he were on fire, burning up from the inside out. He struggled to take deep breaths; his lungs suffused with fluid. He coughed, deep hacking wheezes that expelled fine sprays of mucus tinged in pink.

The pain spread, invading his stomach and bowels, locking them in vise grips of agony. Vomiting and diarrhea followed. Nonstop.

Now the cramping hit again, sharp, wrenching. He leaned over the sink and vomited once more, long after there shouldn’t have been anything left to bring up. A tarry mixture, black and red, flooded into the basin. It was as if his insides were liquefying, turning to jelly. He gripped the edge of the sink, but had no strength left. The room spun in a dizzying spiral.

He knew he’d waited too long; knew he needed to get to an emergency room. He tried to call for his wife, but before he could, the searing effluent rose in his throat again. He sank to his knees and crawled toward the toilet, but failed to make it in time. A rush of burbling flatulence shot from his bowels. A vile, malodorous slime of blood and dark, stringy tissue ran down his thighs and splattered onto the floor. It oozed over the bathroom tile, staining it with a harbinger of something far worse to come.

He lost consciousness and collapsed into the repulsive emulsion.