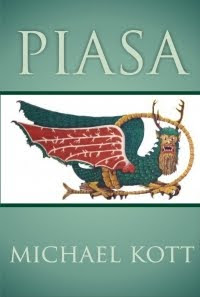 Some are based on dreams, Piasa was based on stumbling across a picture of the Piasa painting found on the bluffs over Alton, Illinois. What would happen if... I thought.

The hardest part is sometimes keeping on track. I currently have 4 projects, including one with my daughter, and I’m constantly shifting focus. The easiest is sitting down and writing as ideas seem to flow.

My daughter and I are doing a final (if anything is ever final) revision of Academy Daze about a young girl’s pursuit of what happened to her brother who disappeared. Our agent is relentless in making us better. Next is the sequel to Piasa, titled Shaitaini, with the same characters. I’m also working on two other novels; one being revised, the other 80% completed.

I let my stories pick the genre. Most are YA adventure or mystery oriented.

I haven’t gotten there yet, but several reviewers of Piasa have said that and it feels great that I’ve connected with them.

I’ve never thought about that. If I did I’d be truthful as always.

Long and hard. My daughter and I have been working and reworking Academy Daze for 10 years. Our agent, who is quite particular and well known, loves the story and our main character; so we hope to someday see this title go to press. My book, Piasa, was luckily published by 2 Moon Press in Marshall, MI, and it has been a pleasure to work with them. Hopefully they will publish Shaitaini too.

Mike Kott has been writing with his daughter Krystee, and on his own, for the past ten years.

On his own, Mike has written several novels. He is currently editing Lifeshift, a work of paranormal fiction, best described as action/adventure, with a dose of a love story. Concurrently, work continues on Shaitaini, a follow-on novel to Piasa, and Moonglimmer, another work of Paranormal Fiction.

With Krystee, he has co-authored Academy Daze, the story of a girl’s first year at the US Naval Academy. The YA novel, originally a screenplay, is loosely based on Krystee’s experiences. In addition, Krystee and Mike wrote the screenplay, Road to Annapolis; based on her experiences at Michigan Tech University, the year she spent there; prior to getting into the Naval Academy. Adapting this screenplay into a novel is a possible future endeavor. Mike and Krystee are also planning the second novel of the Academy Daze series.

Mike was twice chairman and also a past secretary of the Schaumburg Scribes writing group in Schaumburg, Illinois, where he lives with his assistant, a Maine Coon cat named Chessie. He also served as senior editor of the groups Chapbook in 2006, 2008 and 2009. He is a member of the Chicago Screenwriters Network and founder of the Schaumburg Novel Writers Group.

A graduate of DePaul University in Chicago and a retired computer systems analyst, in his “spare” time he volunteers for the United States Naval Academy as a Blue & Gold Officer, interviewing potential candidates for the Navy’s college in Annapolis, Maryland. In addition, he is an avid model railroader and railroad historian, a member of the Northwest Trainmasters Modular Railroad Club and Great Northern Railroad Historical Society. In what’s left of his spare time he is an avid reader and gardener.