Guest Interview/Giveaway - True Stories: Portraits From My Past By Felice Picano 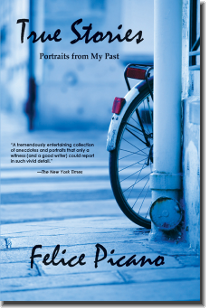 Intriguing people from my past

This book—True Stories-- came together as I was writing the last piece that went into it, about me interviewing fashionista Diana Vreeland in 1967. I realized that the job I had then and that published interview with her, significantly shifted my vocation from art to writing and that I pretty much had no say in the matter.

The hardest part is not waiting until something is ready to be written: jumping the gun.
The easiest part is the actual writing, hour by hour, day by day.

The characters and the germ of the story generally dictate their specific genre. If sometimes only after being tried out in different forms. My novella “Ingoldsby” (in Tales From a Distant Planet) began as a film, then was written as a play, before becoming successful as a novella. And then, later on, I ended up merging the play and novella for a theatre piece: which worked pretty well too.

Even after all this time I’m always surprised someone appears to really want a new book from me, or to like a book or play or poem I’ve written--because essentially, I write for myself. When a story or novel or play “clicks,” or becomes popular or influential I always wonder if someone else couldn’t have written it too…. Was I just an instrument?

What they used to ask movie starlets in the 1960’s --do you sleep in the nude?

Answer: not any more, now that I live in Southern California: it’s too cold at night.

Felice Picano (born 1944) is an American writer. He graduated cum laude from Queens College in 1964 with English department honors. He founded SeaHorse Press in 1977, and The Gay Presses of New York in 1981 with Terry Helbing and Larry Mitchell; he was Editor-in-Chief there. He was an editor and writer for The Advocate, Blueboy, Mandate, Gaysweek, and Christopher Street. He was the Books Editor of The New York Native. At The Los Angeles Examiner, San Francisco Examiner, New York Native, Harvard Lesbian & Gay Review and the Lamdba Book Report, he was a culture reviewer. He has also written for OUT and OUT Traveller. With Andrew Holleran, Robert Ferro, Michael Grumley, Edmund White, Christopher Cox, and George Whitmore, he founded The Violet Quill considered to be the pathbreaking gay male literary nucleus of the 20th Century.

In his memoir Men Who Loved Me, he describes his close friendship with the poet W. H. Auden. In his later memoir/history, Art & Sex in Greenwich Village, he writes about contacts with Gore Vidal, James Purdy, Charles Henri Ford, Edward Gorey, Robert Mapplethorpe and many contemporary and younger authors.

Among those who Picano introduced to the public via his publishing companies were Dennis Cooper, Harvey Fierstein, Jane Chambers, Brad Gooch, Robert Gluck, Doric Wilson, and Gavin Dillard. Several of his novels have been national and international best-sellers, and they have been translated into fifteen languages.

1. Please leave a comment on this post in appreciation of the author.
2. Please fill out the form below.