Book Review: The River Between Us by Richard Peck 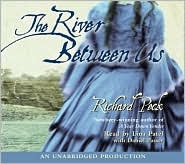 Back Cover:
A steamboat whistle splits the air one evening and with it, all is changed for fifteen-year-old Tilly Pruitt and her family. They’ve been living in a muddy little Mississippi River town in Illinois, fearing the approach of the Civil War. Except for Tilly’s twin brother, Noah, who has been marching and drilling with the other boys in town – all of them ready to solider, some for the North and some for the South.

When the steamboat whistle blows, and the Rob Roy from New Orleans docks at the landing, two remarkable figures come ashore: A commanding and glamorous young lady and her darker, silent servant. Who are these two fascinating strangers And could the servant be a slave? When Tilly’s mother invites them both to room and board at her house, the whole world shifts for the Pruitts. And for their visitors as well.

Within a masterful tale of mystery and the female Civil War Experience. Richard Peck has spun a breathtaking portrait of the lifelong impact one person can have on another. Unexpected and enlightening, this is a novel of countless riches.

Mine:
What a great story of the Civil War at the start. It’s like “Gone With The Wind” on a YA level. The descriptions of what the war was about and how it affects everyone are classic, but also how the North and the South were also very much the same is a theme through out.

The steamboat must stop because the blockade has begun because of the war. The Pruitts invite two of the strangers to come stay with them. The strangers are from the South and have a very different way of thinking from those in Illinois.

The war is upon them all before they know it and they deal with it in different ways. Noah Pruitt decides to join up to fight. Our strangers from the South keep the Pruitts in good shape by having money to pay for supplies that are often very expensive.

This is the first of the authors books I’ve read, but I would definite read more if they all come like this one.
Posted by SueFitz at 10:00 PM