Book Review - Death in the Clouds by Agatha Christie 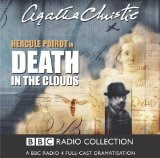 From the back:
On an airplane bound for London from Paris, one of the eleven passengers is dead. The small red puncture wound on the woman’s neck might have been accepted as a sting from a wasp, but luck is not on the killer’s side. Hercule Poirot is aboard the plane, and he discovers a thorn typically used with a blowpipe near the victim’s feet. As he tackles the case suspicion points in all directions, even back to Poirot when the blowpipe is found tucked behind his seat. Can Poirot prevent the culprit from getting away with murder?

Poirot must round up the usual suspects (the 9 passengers left) and narrow down the who did it. It seems like a daunting task – there are twists at every turn. The least likely suspect might be guilty, then again maybe not. Well we do know that Poirot is not guilty.
Posted by SueFitz at 12:03 AM