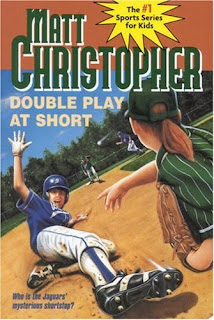 
Back Cover: Danny Walker is on eof the best players the team has; in fact, his adoptive parents and sister consider him a shoo-in for the shortstop position on the All-Star team. But that was before Tammy Aiken, the opposition’s new “Hot Dog” shortstop, showed up. Danny has a sinking feeling the newcomer is as good as he is – feeling her stats back up. And yet something besides her threatening to steal the All-Star spot from him is bothering him.. The more he watches her, the more he becomes convince that he’s seen her – or someone just like her – play before. Why does Tammy seem so familiar?

Mine: (I try to read some of the same books as my nephews. The older one loves Matt Christopher and I love baseball.) This is a great way great way to also discuss adoption, when do you tell someone that their were adopted.. Danny seems to have always known. Having a brother who was adopted as a baby, it’s nice to see how Danny belongs in the family.
Posted by SueFitz at 8:01 PM No comments:

Email ThisBlogThis!Share to TwitterShare to FacebookShare to Pinterest
Labels: 101 Books, A To Z Reading, Book Review, Matt Christopher, Pages Read, YA Through The Decades

Book Review: Masks From Around the World by Garth Dahl


Back Cover: Garth Dahl bought his first mask in Costa Rica in 1989 as a travel souvenir, and this book details his discoveries in mask buying that followed. Beautiful photographs bring out the visual energy of the masks that he assembled over 15 years, on five continents. Dahl shares valuable practical advice with beginners who might wish to collect masks themselves – in other countries, in Canada and on the internet.

The author’s interview with noted West Coast carver Reg Davidson reveals how a mask maker expresses culture through masks, and leads to Dahl witnessing a highly significant event in the history of the Haida nation of British Columbia.

Mine: What an interesting book about masks. I’ve always enjoyed looking at them at museums, but have never thought about the collecting part of it. The photographs are wonderful – they follow Dahl on his adventures around the world to find his prized masks. It’s interesting to see that almost every continent or area of the world has masks. My favorite masks are the “Head in the Air” that looks much like a giraffe and the Stone Faced with it’s beautiful mother of pearl.

This should be considered a wonderful starting resource about masks.
Posted by SueFitz at 7:35 PM No comments:

Book Review & Interview: 70 Meals, One Trip to the Store by Kelly Donlea 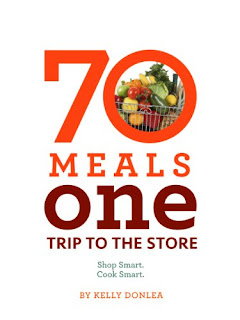 
Back Cover: With 70 Meals, One Trip to the Store, you will learn how to stock your pantry with a small and streamlined list of ingredients that will allow you to make dinner night after night without a trip to the store.

For more shortcuts, solutions and meals palling tools that bring organization to your life and good food to your table, visit the website Organizing Dinner

Mine: I just wish I had more to cook for (just my mother and I). The great thing about this book is the simple recipes, but very doable for a family even with picky eaters. The recipe that best to me are the Stuffed Bell Peppers, which I miss eating. I did try the Lemon Honey Chicken which were delicious (if I do say so myself).

I think this is a great book to give as a gift to give to the busy mother, to help from making dinner time so hectic.

Here is her interview:

How did the idea for the 70 Meals, One Trip to the Store come to you?
I was tired of needing different ingredients from the store every night when I went to make dinner -- and having a hard time getting to the store with a toddler.

What is the hardest part of writing for you? What's the easiest?
Creating new recipes is a joy and a breeze for me. Editing and proofing my own work is a near-impossible combination of second-guessing, and creative block.

What's next for you? Are you currently working on or have plans for future projects?
I have a salads cookbook that is nearly complete, as well as a lite ingredients book and a deserts book based on the 70 Meals, One Trip to the Store concept in the works.

Why did you choose to write a cookbook?
Writing was my profession, and cooking was my passion. At the same time, I found I had really good ideas, and a knack for putting ingredients together. The cookbook was a natural progression. I believe sharing sensible cooking tips is what I am meant to do.
Posted by SueFitz at 7:17 PM No comments: 
Back Cover: On the Anniversary of his beloved wife’s death, Dr. Michael Everett receives a letter Hannah had written to him.

In it she reminds him of her love and makes one final request. An impossible request – I want you to marry again. She tells him he shouldn’t spend the years he has left grieving her. And to that end she’s chosen three women she asks him to consider.

First on Hannah’s list is her cousin, Winter Adams, a trained chef who owns a café on Seattle’s Blossom Street. The second is Leanne Lancaster, Hannah’s oncology nurse. Michael knows them both. But the third name is one he’s not familiar with – Macy Roth.

Each of these three women has her own heartache, her own private grief. More than a year earlier, Winter broke off her relationship with another chef. Leanne is divorced from a man who defrauded the hospital for which she works. And Macy lacks family of her own, the family she craves, but she’s a rescuer of strays, human and animal. Macy is energetic, artistic, eccentric – and couldn’t be more different from Michael.

During the months that follow, he spends time with Winter, Leanne, and Macy, learning more about each of them… and about himself. Learning what Hannah already knew. He’s a man who needs the completeness only love can offer. And Hannah’s list leads him to the woman who can help him find it.

Mine: As ever Macomber gets to the heart. Michael must live with the fact that his wife Hannah who died over a year ago is giving him permission to move on with his life. She has left him a letter with 3 choices of ladies who might be suitable. As always the least likely on paper is probably the best choice for him; if he will just let his heart open.
Posted by SueFitz at 6:41 PM No comments:

I have gotten behind in my posting while taking care of some medical issues with my mom - thank yo for your patience. I know I need to get quite a few reviews up and will be posting them as quickly as possible.

Also if you have been a winner of one of my book giveaways - please contact me again. I know I have some books waiting for a new home. I'm still waiting on some to contact me initially also.
Posted by SueFitz at 6:37 PM No comments:

Guest Blog & Giveaway - Margo Candela - Goodbye to All That


How did the idea for the Goodbye to All That come to you?


I love office life. I find it beyond interesting, how people behave during their workday which is not how they are on their off hours. I knew I wanted to write a book about a young woman’s commitment to her job and how real life interferes with her career ambitions. It all came together for me on my last draft. The focus shifted to the conflicts facing Raquel, my main character, between her family and her job.


What is the hardest part of writing for you? What's the easiest?


The easy part is coming up with the nut of an idea. I think of a beginning, middle and end and stick with them even though things might change between those three points. What’s hard is determining if the idea is one worth committing to and, once I do, not letting my attention stray.


What's next for you? Are you currently working on or have plans for future projects?


I’ve put together a couple of proposals and am polishing a screenplay. I’m always writing or thinking about what I’m going to write next. But right now, I’m taking care of some housekeeping, meeting with agents, talking with my editor and doing the ground work so I can focus on just writing and not worry about the other stuff.


What's it like hearing that readers are eagerly awaiting your book's release date?


I’m always surprised and flattered because I do the same thing. I’m also an impulse book buyer. I like to go to a bookstore and pull down random titles and see what grabs me. This is why a great cover is so important. I’ve been very lucky with my last two and I can only hope the next one is even better.


What is one question that you've always wanted to be asked in an interview? How would you answer that question? Is it worth it?


Everyone assumes I’m living my dream and that I’d never consider doing anything else with my life. Okay, it’s true. I do love that I’ve gotten a chance to write novels and see them published. On the other hand, cupcake recipe tester would be a nice job to have, too.


Considering the horror stories I’ve heard, it was surprisingly easy. Between 2003 and 2005 I finished and polished my manuscript and made looking for an agent my part-time job. By early 2006 I’d signed my first contract and by early 2007 my first novel (Kensington, Jan. ’07) was in bookstores. It was a lot of work and worrying, but I know I got lucky and for that I’m very grateful.

Read:
Flotsam by David Wiesner
Are You My Mother? By P.D. Eastman
Half Magic by Edward Eager
A Fatal Slip by Melissa Glazer
The Twenty One Balloons by William Pene Du Bois
Lily: A Basset Hound's Tail of Love by Cathy L. Rudert
Remembering When I Was Young by Carole Carson
Eddie Robinson by Denny Dressman
70 Meals, One Trip to The Store by Kelly Donlea
Masks From Around The World by Garth Dahl


Reviewed
Flotsam by David Wiesner
Half Magic by Edward Eager
Superfudge by Judy Blume
Lily: A Basset Hound's Tail of Love by Cathy L. Rudert
Remembering When I Was Young by Carole Carson
Posted by SueFitz at 12:01 AM No comments: