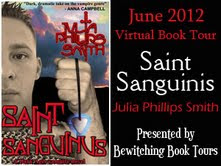 Award-winning filmmaker and author Julia Phillips Smith lives on Canada’s east coast with her husband and her mom, where the rugged sea and misty forests feed her thirst for gothic tales.
A graduate of Ryerson University’s film program, Julia’s previous writing credits include scripts for radio and television.

Like most writers, I already considered myself to be one from childhood. I even had a Little House on the Prairie-esque ‘novel’ I’d written when I was in grade five, also illustrated by yours truly. It only made it to a single copy written in pencil in my school notebooks.

I’ve been compelled to tell stories and was encouraged to do so by my family and teachers.

2. How long did it take you to write SAINT SANGUINUS?

It took several years. It began as Peredur’s story as I followed the 6th century Welsh warrior for my first NaNoWriMo. I set that storyline aside for awhile as I worked on another manuscript, returning to it the following year during NaNoWriMo when I followed his beloved’s story. I wrote from Tanwen the chieftain’s daughter’s point of view, and I found this intense submersion into each POV to be really liberating.

The biggest challenge was then uniting the two storylines into one narrative.

So far I’ve never had to completely scrap an entire plot. Make changes to sequences that aren’t working, yes.

That depends entirely upon my obsession du jour.

If I’m focused on writing sword-fighting sequences, I might head for the section where I can find visual reference books on weaponry.

Not too many. I’m so busy writing and doing everything else, I only read during my lunch break at work or waiting for the bus. Of course, I mainly catch up on sleep when I’m on the bus, so you see where my reading time goes.

6. In all the books you've read, who is your most favorite character and why?

The Marquess of Rothgar from the Malloren novels by Jo Beverley. He drips with James Bondian cool, but dresses like the Scarlet Pimpernel. Sweet.

1 – I have a Russian phrasebook in my purse, because I’m teaching myself to speak Russian.

2 – I’m a passionate balletomane with a lifetime goal to see as many of the great ballet companies in their home venues as possible.

3 – I sing alto in choir and have had the great luck to sing Mozart’s Requiem, Orff’s Carmina Burana and Vivaldi’s Gloria in concert with orchestra.

4 – I follow the lead of Twin Peak’s Special Agent Dale Cooper and Supernatural’s Dean Winchester when it comes to diners, cups of coffee, shots of whisky and slices of pie.

5 – I’m looking forward to our yearly writers’ retreat in the fall. I know it’s only three days, but for all of us who have been attending it for nearly a decade, it’s pretty much the highlight of our year.

BE MY PRINCE by Julianne MacLean, where royal matchmaking can make or break kingdoms as well as hearts.

I would have to say ON THE ROAD by Jack Kerouac.

I’ve just released BOUND BY DRAGONSFYRE, a dark fantasy that follows a young falconer’s apprentice as he stays one step ahead of deadly palace intrigue.

You can check out the book trailer here:

As VampireRomanceBooks.com says, “If you’re a fan of smiley, sunshine and rainbow vampires, this book may not be for you. These vampires are vicious and live for blood.”

In SAINT SANGUINUS, I return to the roots of vampire lore while taking my main character into superhero-origin-story territory:

An elite brotherhood stands between humans and vampires, preventing one side from annihilating the other. Who are called to this service? Only those warriors who curse God with their dying breath.
Welsh warrior Peredur falls to a spear before he can claim Tanwen for his bride. Raging on the battlefield, Peredur utters the curse that seals his fate and leads him to another life. Using the power of a saint whose bone makes up an amulet, Peredur takes on the trials to become a true member of the brethren. Yet his need for the chieftain’s daughter Tanwen still burns.
Tanwen resists her father’s command to take a husband. The only one who understands her sorrow is Cavan, the wise woman’s son. When he promises that he can reunite her with her beloved, she agrees to his terms. But does Tanwen truly understand the depth of the price that must be paid?


Where you can find author Julia Phillips Smith:

Blog: A Piece of My Mind - http://julia-mindovermatter.blogspot.ca/