From the author of Undercover Rebel comes . . . 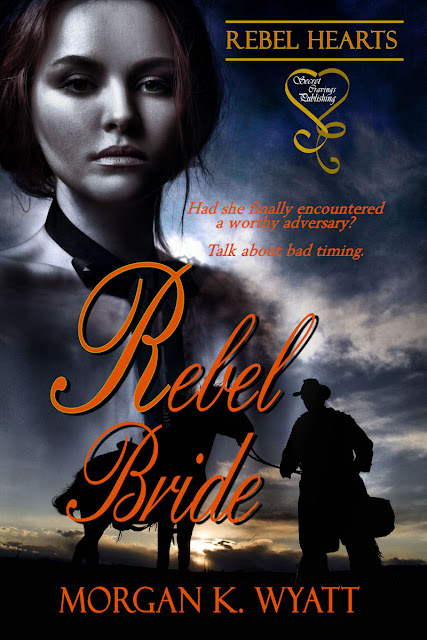 Eileen Sewell sparks plenty of gossip by spiteful matrons
and their horse-faced daughters that she’d find herself alone due to her picky
ways. Of course, she didn’t believe them. Then again, she also didn’t expect to
be a mail order bride either. It wasn’t easy snagging a husband who hadn’t
heard about her willful nature. Eileen finally gave up hope of finding love,
and decided to settle for whatever she’d find out west. If that wasn’t lowering
enough, she’d just witnessed the first train robbery. Unfortunately, the
outlaws saw her too. Enter Marshal Colt Sheppard, who excels at extracting
information from reticent witnesses. His crooked smile and broad shoulders
won’t charm her. She’d played this game before, only she never had a worthy
adversary. Talk about bad timing.


From Rebel Bride
“What
has your pretty little brow all furrowed up like that?” he asked with a touch
of laughter in his voice.

“Well-I-well…”
This was her favorite type of man, one who would flatter her with words of her
beauty. Without thinking, she fell into her normal flirtatious attitude, batting
her eyes coquettishly. This should be easy.
“Maybe
you’re deciding which lies will work on me best. Is that it?” He put one hand
on a seat and leaned forward, closing the distance separating them.
He
called her a liar. “How dare you!” She hissed the words, pulled her back ramrod
straight, and narrowed her eyes. She learned how to project indignant from the
best, her mother. Never mind the fact she’d been contemplating which lie to use
on him.
His
laughter unnerved her, but not as much as his hand touching her cheek. She
looked up into his suddenly somber eyes. What was he thinking? He looked so
serious. She blinked twice. Her eyes must be playing tricks on her because his
face seemed closer, closer still, until he grew unfocussed. She closed her eyes
briefly, hoping to clear up her vision.
Lips
landed on hers, warm and firm. Her eyes popped open. Sure enough, his slightly
out of focused nose and a hunk of blond hair filled her vision. Once she
conquered her shock, she decided to let him kiss her. It wasn’t as if she could
stop him. Unlike her previous beaus who made awkward attempts she naturally
foiled, this was nice. Her skin felt warm despite the wind seeping around the
window. Her heart kicked up in an odd flutter, and her toes curled. Could this
be what her sister talked about when she described kissing Gray? To think she
scolded her sister, calling her no better than a light skirt. Did that make her
a light skirt too? She couldn’t afford to be one. She pulled away from the kiss.
“Unhand
me sir!”
His
eyes crinkled in suppressed laughter. “Look at where my hands are.”
She
looked at one large hand still rested on the back of the seat, the other hung
lax against his side. Hard to argue with him on that, but still he kissed her.
He shouldn’t have done that. “You shouldn’t have kissed me. It was unpardonable
of you to take advantage of a war widow.”
Colt
crossed his arms and shook his head slowly back and forth. “War widow, my foot.
I doubt that very much. Don’t know why you’re parading around in weeds, but I
am interested in finding out.”
“What
makes you think I am not a widow?” Eileen was miffed over her costume not
deceiving him. It could be widows did not go around kissing strange men or at
least recent ones didn’t. She’d heard there were some friendly widows in town,
but their deceased husbands served only as a name, making her wonder if they
ever existed.
He
eyed her up and down, smiled, and then let loose a bark of laughter. “Ah, if
you were ever married, then your husband should be horse-whipped for his
failure to kiss you properly. You do not kiss like a woman with experience. You
are more like a love-starved virgin than a widow.”
Eileen
stiffened her spine. His words were true, but she resented them just as the
same. “Sir, I beg you not to speak poorly of my husband.”
“Ma’am,
I can’t speak for a man who doesn’t exist. If you were my wife, you would be
well kissed, well handled, and well pleasured.” He said the last word in a
suggestive growl. 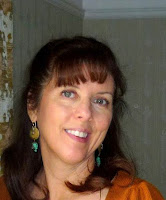 Morgan as a child had to suffer through movies
with clueless heroines rescued by smart men. Her mother dutifully read
her stories where princesses waited for princes to jumpstart their
lives. There were no proactive female role models in the media at that
time, with the exception of Wonder Woman. It is for this reason, and
that it is fun, Morgan writes about strong women going after what they
want.

Learn more about Morgan at: http://www.morgankwyatt.com.