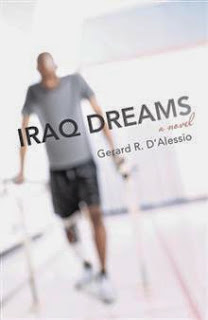 Even before he is fully awake in his bed at Walter Reed Hospital, United States Army reservist Rick Garcia knows it is going to be a very bad day. It is November 2004, and as if having his leg amputated during an extended tour in Iraq is not bad enough, Rick is about to receive a letter from his wife, Coralee, telling him she is divorcing him and taking their two children from their home in New Jersey to Oklahoma to live with her mother.
Now forced to re-invent his life, Rick decides to do his rehabilitation in a V.A. hospital near his children. While dealing with terrifying nightmares and flashbacks, feeling vulnerable and alone, Rick falls in love with one of his nurses. But when Rick’s children witness a murder that puts their lives in jeopardy, Rick chooses to work with Coralee to protect their children from further danger—a decision that changes everything.
Iraq Dreams is the compelling story of a wounded veteran who must reevaluate his life as he and his family battle to overcome the psychological damage that resulted from the war.

Gerard R. D’Alessio was a licensed psychologist for thirty-seven years. Now retired, Dr. D’Alessio lives with his artist-wife, Susan, in Philadelphia, Pennsylvania, where he writes fiction that focuses on psychological conflicts and passions of intimate relationships and family dramas.

Gerard is giving away a $25 Amazon Gift Card!

Terms & Conditions:
 By entering the giveaway, you are confirming you are at least 18 years old.
 One winner will be chosen via Rafflecopter to receive one $25 Amazon Gift Certificate or Paypal Cash.
 This giveaway begins July 1 and ends on July 15.
 Winners will be contacted via email on Thursday, July 17 .
 Winner has 48 hours to reply.
Good luck everyone!

ENTER TO WIN!
a Rafflecopter giveaway