Here are my 3 favorites: 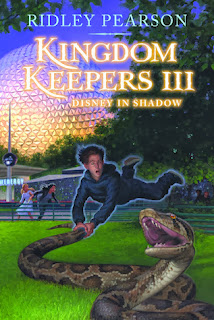 When Disney Imagineers installed hologram guides for the Magic Kingdom, using teenage models they had no idea the technology might backfire. But backfire it did: some nights when the kids go to sleep, they wake up in one of the Disney parks as a hologram.

With the adventures set forth in the first books now behind them, Kingdom Keepers 3: Disney In Shadow follows the five teens, Finn, Philby, Willa, Charlene, and Maybeck as they search to find Wayne, their mentor and head Imagineer who has mysteriously gone missing. Concerned Wayne has been abducted by the Overtakers—Disney villains, who along with other Disney characters, take over the parks when the turnstiles stop spinning, and want desperately to steer the parks to a far darker place—the five kids pick up a major clue from a close friend, Jez, whose dreams (nightmares, really) often accurately predict the future.

The very few clues from Jez’s dream lead the kids into Disney’s Hollywood Studios and Epcot--through imaginary worlds that become real, by imaginary kids who are real. Each clue seems tied to the last, and with the stakes growing ever higher, what starts out as a puzzle ends up as a fight for their lives. Through a transparent paper box, a quest for a sword, rides on Soarin' and Maelstrom, life-and-death encounters with giant snakes, and a devious Maleficent, the Kingdom Keepers not only begin to decipher deeper meanings to the clues, but discover new truths about themselves and their ever-growing friendships 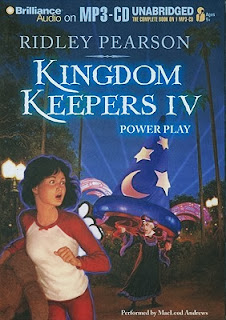 Just when life for the five Kingdom Keepers is beginning to settle down, an intriguing video suddenly appears on Philby's computer at school. It's a call to action: it seems that the Overtakers, a group of Disney villains, are plotting to rescue their two captured leaders, who were hidden away by Disney Imagineers after a recent violent encounter at Disney's Hollywood Studios. A staged attack by some mysterious new Overtakers at DisneyQuest confirms the Keepers? fears. One of their own, Charlene, has been behaving oddly. Has she tired of her role as a Keeper, or is there something more sinister at play? When she's caught sneaking into Epcot as a hologram ? which is strictly against the group's rules ? Finn and Philby know the Keepers must act. The Keepers have so many puzzles to solve: has the impossible occurred? Have the Overtakers created their own holograms? Have they found a way to ?jump? from the Virtual Maintenance Network onto the Internet, and if so, what does that mean for the safety of the Parks, and the spread and reach of the Overtakers? Are they recruiting an army of kids for their evil purposes? Trouble looms as the Kingdom Keepers struggle to differentiate friend from foe and battle new and increasingly dangerous enemies, all the while knowing they may be nearing a point of no escape.

My last one is a favorite series also - Debbie Macomber's Angels 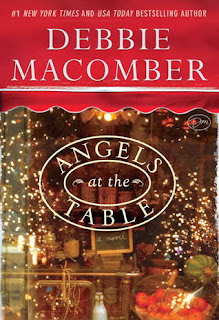 In this joyous and whimsical holiday novel, Debbie Macomber rings in the season with the return of Shirley, Goodness, and Mercy, delivering laughs, love, and a charming dose of angelic intervention.

Shirley, Goodness, and Mercy know that an angel’s work is never done, especially during a time as wondrous as New Year’s Eve. With an apprentice angel, Will, under their wings, they descend upon Times Square in New York City eager to join in the festivities. And when Will spies two lonely strangers in the crowd, he decides midnight is the perfect time to lend a heavenly helping hand.

Lucie Farrara and Aren Fairchild meet after bumping into each other—seemingly by accident—in Times Square on New Year’s Eve. They immediately hit it off and find they have a lot in common: Lucie is a burgeoning chef and Aren is a respected food critic. But just as quickly as they’re brought together, another twist of fate tears them apart, leaving Lucie and Aren with no way to reconnect.

A year later, Lucie is the chef of an acclaimed new restaurant and Aren is a successful columnist for a major New York newspaper. For all the time that’s passed, the two have not forgotten their one serendipitous evening—and neither have Shirley, Goodness, Mercy, and Will. To reunite the young couple, the angels cook up a brilliant plan: mix true love, a second chance, and a generous sprinkle of mischief to create an unforgettable Christmas miracle.