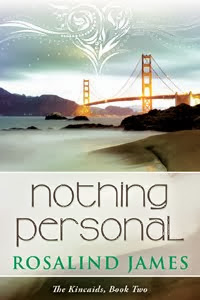 Alec Kincaid has never met the obstacle he couldn’t overcome—or the woman who could resist him. And it’s not going to happen now, not with his star shining more brightly than ever in the high-stakes arena of San Francisco’s software industry.

Desiree Harlin doesn’t believe in fairy tales, and she doesn’t waste time wishing. She’s learned the hard way that dreams don’t come true. And with her reputation and hard-won security on the line, succumbing to temptation isn’t an option.

But things aren’t always what they seem. And even stars sometimes fall.

One year ago to the day, I finished “Just for Now: Escape to New Zealand,” my third book, with a sigh of happiness. Here’s what else was happening that day:

I was sick. And in pain. And getting ready to spend a week in the hospital, get a 9″ scar down the center of my abdomen–goodbye, two-piece swimsuits—and find out whether this was an inconvenience, or if I was going to have to hurry up and do that editing and publishing FAST.

I’d decided to self-publish based on, well, on not knowing if I had time for anything else, and on hearing from a major NYC agent, after asking for the entire manuscript, that she liked “Just This Once,” but she thought that “New Zealand rugby” would be too tough a hook in the U.S. market. (Well, not to mention the agent who had her assistant tell me that she didn’t like the story in “Just Good Friends.” At all. And neither did the assistant. All righty, then!)

Fast-forward a year. I published those first three books not quite 11 months ago. In that time, I’ve sold over 100,000 books, published three more books, and even had a heady hour when I outranked both Nora Roberts and Danielle Steel among Contemporary Romance authors. (Just an hour, but a pretty good hour!)
And here’s what I’m grateful for.

1. That I’m not dead, and it looks like I won’t be for a while yet (no malignancy. Long recovery, but a recovery!) Instead, I got a good, sharp lesson in the fact that life is short and uncertain, and if you have a dream, pursue it NOW. This is your one and only life. Don’t waste it.

2. I won’t say, for the very bad things that have happened to me, including the very worst thing, because nothing will ever make them good things. But I will say that descending into that pit and crawling my way out again gave me compassion not just for myself, but for others; opened my heart; and gave me courage, because I’ve faced the worst. And for that, I’m grateful.

3. That those 38 agents and publishers said no. Garth Brooks has a song where he says, “Some of God’s greatest gifts are unanswered prayers.” Instead of waiting several years for my first book to be published, perhaps only to watch it die in the water and torpedoing all chances of ever publishing the rest of my books, I got to do it right away. And it worked! Who knew?

4. For New Zealand, and Australia too: For helping me heal, making me laugh, lifting my soul, and inspiring me. (And for playing rugby, of course!)

5. For my husband. I’m still not sure how I ever got the courage to consider turning one of the stories in my head into a story on the computer, but I don’t think I’d have done it if he hadn’t encouraged me to try. And then, a few weeks later, when writing it was the only thing I wanted to do, told me to quit my job (to QUIT MY JOB), and take 2012 to write and see what I could do with this new passion. For holding me and encouraging me and comforting me and congratulating me and keeping me going this entire year—and all the years before this too. Thanks, honey! You get a new car!

6. For my children. Who laughed HARD when they learned I was writing a romance novel, and harder when they learned that the hero was the captain of the All Blacks, but have talked about my characters and plots with me, and even read some of the books! (skipping the steamy parts, of course!)

8. For my readers. Oh, yeah, definitely for my readers. You don’t know how much it’s meant to me to hear that you enjoyed the books, or you stayed up too late reading, or even that reading the books helped you get through a tough period in your life. I write the kinds of books I enjoy reading as an escape, and if they’ve been a nice escape for others as well, I am so happy. Here’s my “thank you” to everyone who’s written to me, who’s left a review, heck, who’s bought a book or downloaded a free one! You guys are awesome.

9. For Amazon, for providing an alternative way for people like me to publish—people who are writing something a little different, or who just get too discouraged by the rejections, and would otherwise have to leave that book on the computer. And, especially, for offering KDP Select with its “five free days,” which made the difference for me between selling a few books and selling tens of thousands.

10. That I get to spend my life thinking up stories, writing them down, and sharing them. Some days, I literally pinch myself, because my life is too good to be true.


Rosalind James is the author of the Kindle-bestselling "Escape to New Zealand" series (currently five titles strong), as well as the new U.S.-based "Kincaids" series. Her first book,"Just This Once," has sold tens of thousands of copies in the year since it was published, eventually reaching #85 in the Amazon store. A marketing professional and publishing industry veteran, Rosalind has lived all over the United States and in a number of other countries, traveling with her civil engineer husband. Most recently, she spent several years in Australia and New Zealand, where she fell in love with the people, the landscape, and the culture of both countries. She loves trying new things in her writing, most recently the mystery and suspense in "Nothing Personal."

Rosalind credits her rapid success to the fact that “lots of people would like to escape to New Zealand! I know I did!”