Author Guest Post : Past Medical History:Recollections of a Medical Miscreant by Don Stewart 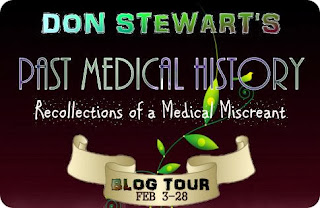 Feedback on Past Medical History

I have to say I’ve been surprised by how well Past Medical History has been received since its release last October. Not that it has sold a million copies (it hasn’t, yet), but for the several hundreds of books we have sold, the feedback we’ve been getting has been both encouraging and consistent.

Prior to publishing the book, I really did not consider myself a writer. No false bravado here. I like to write, and I enjoy the process of massaging ideas onto a page - but that doesn’t mean that I know what I’m doing. (I like to cook, too, but I suffer no illusions of being a chef.)

I am an artist, however the art business has taught me not to expect too much of any single project. Drawings that I think are clever, well executed and meaningful may take years to be recognized, while ideas tossed onto paper on little more than a whim can hit the market as instant best sellers. So we hoped for the best with Past Medical History, not really knowing what ‘good’, ‘better’, or ‘best’ could mean, but happy with the fact that a new creative experiment had been completed and launched successfully.

Given the nature of this book – stories about a medical student who decided not to practice medicine – I expected different responses from my medical and non-medical readers. Those expectations were not disappointed.

Non-medical folks, the ones who have been kind enough to offer their thoughts, anyway, have been extremely positive in their assessment of the stories, and more than complimentary regarding the quality of the writing overall. “I read it in one sitting” is becoming a mantra of sorts, followed by assurances that they found the book to be entertaining, engaging, informative and funny – always welcome news to a professional humorist. These descriptors have been especially encouraging, since my portrayal of medical school and residency in these stories is anything but flattering, so much so that a part of me was concerned that the entertainment and educational potential of the book might be overlooked, and the stories dismissed as a rant.

Based on what we’re hearing, my concerns were largely misplaced.

What negative feedback we have received about the book has also been intriguingly consistent, apparently having struck a common nerve among a small number of physicians who have enjoyed long and successful careers in the profession. And while it may be entirely coincidence, each of these doctors mentioned in the course of their critique that they too had come upon a crossroads at some point in their training, and rather than leave medicine to follow their true desires, decided to remain in the industry in order to serve the higher good.

While I admire their dedication, and certainly their service, I cannot help but wonder if they might have done even more good to society if they had been true to their hearts, rather than commit themselves to a system that disagreed with their better natures.

In bright contrast, some of the book’s highest compliments and encouragements have come from medical professionals who love their jobs and their callings as much as I do mine, and seem to relish the fact that I left when I did to chase after my artistic inclinations.

The other comment that we hear again and again from our white-coated readers is this:

“Past Medical History should be required reading for all pre-med and medical students.”

I don't have to attribute the quote to any one commenter, because we have heard it so frequently, word for word, from pre-meds just entering the application process, from parents of medical students in the heat of their studies, and even residents who are living the stories in real time, relaying their experiences to us directly from the front lines of modern medical training. From their reports, it seems that little has changed in the trenches of academic hospitals, since the days when I carried a pager.

Fortunately, recruits entering the fray today can get a friendly heads up into the challenging world that is waiting for them. 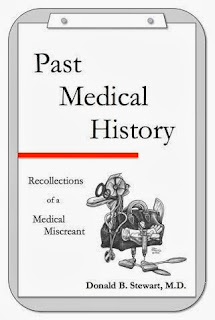 Past Medical History is a compilation of short stories chronicling the life of Dr. Don Stewart, who grew up with the singular goal of becoming a physician, then quit the day he earned his medical license to make a life and a living as an artist. It’s The Devil Wears Prada meets The House of God, with a character who sees his own career circling the drain, pronounces it DOA, and turfs himself to an art studio for treatment. It’s Patch Adams, with an attitude; The Things They Carried, dressed up in scrubs and a white lab coat.

This series of stories draws a clear picture of a doctor who recognized the pitfalls of his chosen profession, discharged himself from the hospital, then took his life in a more creative, and far healthier direction. 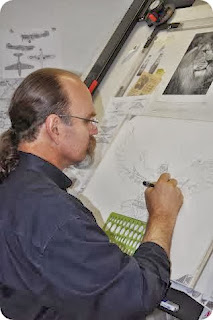 Don Stewart has a bachelor’s degree in Biology and Art, with honors, from Birmingham-Southern College, and an MD from the University of Alabama School of Medicine. He also served a year-long surgical internship at the Mayo Clinic, where he published some of his first composite drawings, and won awards for poetry and short fiction.

Dr. Stewart’s short stories have since been published in Pulse--voices from the heart of medicine, The Dead Mule School of Southern Literature, The Placebo Journal, and The Journal of Irreproducible Results, where he is listed as honorary Art Editor. For four years he served as Contributing Editor to Informal Rounds, the newsletter of the University of Alabama Medical Alumni Association.

For the past quarter century he has made his living as a self-styled Visual Humorist, hammering words and pictures together at the DS Art Studio Gallery in Birmingham: www.DSArt.com. You can also find him at www.PastMedicalHistoryBook.com.

His latest book is the autobiography, Past Medical History.