Book Blast/Giveaway : The Lords of Hanrahan by Darrell Tooker 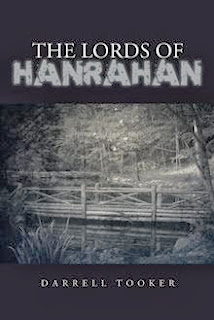 Rumors circulate that the old McPherson place a couple of miles outside of Framingham, Connecticut, is haunted. But one summer day, fourteen-year-old Laura Mueller and her three friends summon the courage to go there. Just because old man McPherson committed suicide there a couple of years ago at age ninety-three doesn’t mean it’s been overtaken by ghosts. But Laura has no idea what the old house has in store for her in the future, and it’s not going to be a pleasant experience. That house, which haunts unsuspecting young women when they are the most vulnerable, chooses Laura to receive its horrific powers. Worse, it waits until the opportune time—years later, when she’s married and is expecting her first child. When she is seven months pregnant, Laura is summoned back to the old McPherson place by some mysterious and evil force. Held captive in a strange place, she wonders if she’ll ever find her way back to her former life.

Darrell Tooker served twenty years in the US military and is a retired maxillofacial surgeon. He also drove the Friendship Boats at Walt Disney World for ten years, retiring in 2008. Tooker now lives in Clermont, Florida, with his wife, Jennie.