Book Blitz : The Arrival (The Eslite Chronicles #1) by C.M. Doporto 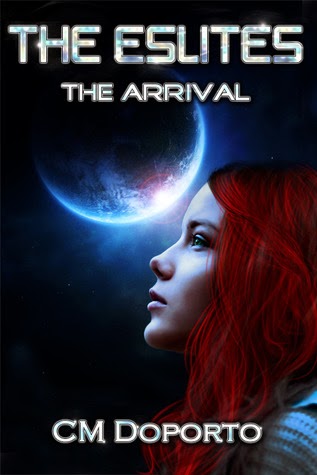 The Arrival (The
Eslite Chronicles #1)
by C.M. Doporto
Release Date: 11/15/13
Summary from Goodreads:
Can Miranda save the human race?

An elegant, sophisticated alien species on the verge of extinction has invaded
Earth and confined an entire generation of young women, after negotiating a
treaty with the world’s governments. Eager to help the aliens reproduce, but
frightened by her imprisonment at Nidus, the Eslite medical compound,
sixteen-year-old Miranda Mays endures callous scientific experiments in the
Eslite’s quest for survival.

When Miranda discovers the ultimate consequences of her egg donations, she
organizes a rebellion, enlisting fellow donors in her cause. But soon she
realizes the mysterious headmaster, Dimas, knows of her plot. And there’s
something about him that bothers Miranda, though she can’t describe it. The
fate of humanity hangs in the balance, so she can’t back down. But will Dimas
expose her defiance?

Book Excerpt
The Eslites, The Arrival
“Yes, thank you. It’s nice to be out of the scrubs.” For whatever reason, I grinned when our
eyes met. I’d never paid much attention to Dimas’ features, but the more I stared at him, I
noticed how young he looked. If not for the slight five o’clock shadow, I’d have to say he wasn’t
older than twenty. I wasn’t sure, though, because all the Eslites had flawless skin.
“You are quite beautiful.” He arched a brow and sipped his water.
“Thanks.” No matter how hard I tried, I couldn’t tear my gaze from his. It was as though he
had me in a trance. I noticed everything about him. From his debonair smile, to his square jaw,
and his perfectly sculpted body that belonged in a Calvin Klein underwear ad. The guy was hot.
What the heck was wrong with me?
That freakin’ alien might rape me.
I had to be losing it. He was pure evil. Wasn’t he?
I dug my fingernails into my palm, and the pain broke our connection.
“Consider them an early birthday gift.”
What? How did he know my birthdate? Oh, wait, they’d poked and prodded every hole in
my body, of course he would know my birthday. But why would he observe an earthly custom?
For half a minute I didn’t say anything, just kept staring at the shaggy, black rug beneath my
f

Teen Sci-Fi/Dystopian ages 12 and up.

About the Author
CM Doporto lives in the
great state of Texas with her husband and son enjoying life with their
extensive family along with their Chihuahua, Mexican Redhead Parrot, and
several fish.

She earned her Bachelor’s Degree in Journalism from The University of Texas at
Arlington. She briefly worked in the area of Public Relations and Advertising
and then pursued a career in the field of Human Resources. CM considers herself
a life-long learner and returned to school and earned her Master of Art’s
Degree in Organizational Development from Dallas Baptist University.

She writes Young Adult and New Adult Sci-Fi/Urban Fantasy stories about
ordinary women who do extraordinary things, become a heroine, and find love
along the way.
***Author Links***