Book Blitz : Broken Aro (The Broken Ones #1) by Jen Wylie 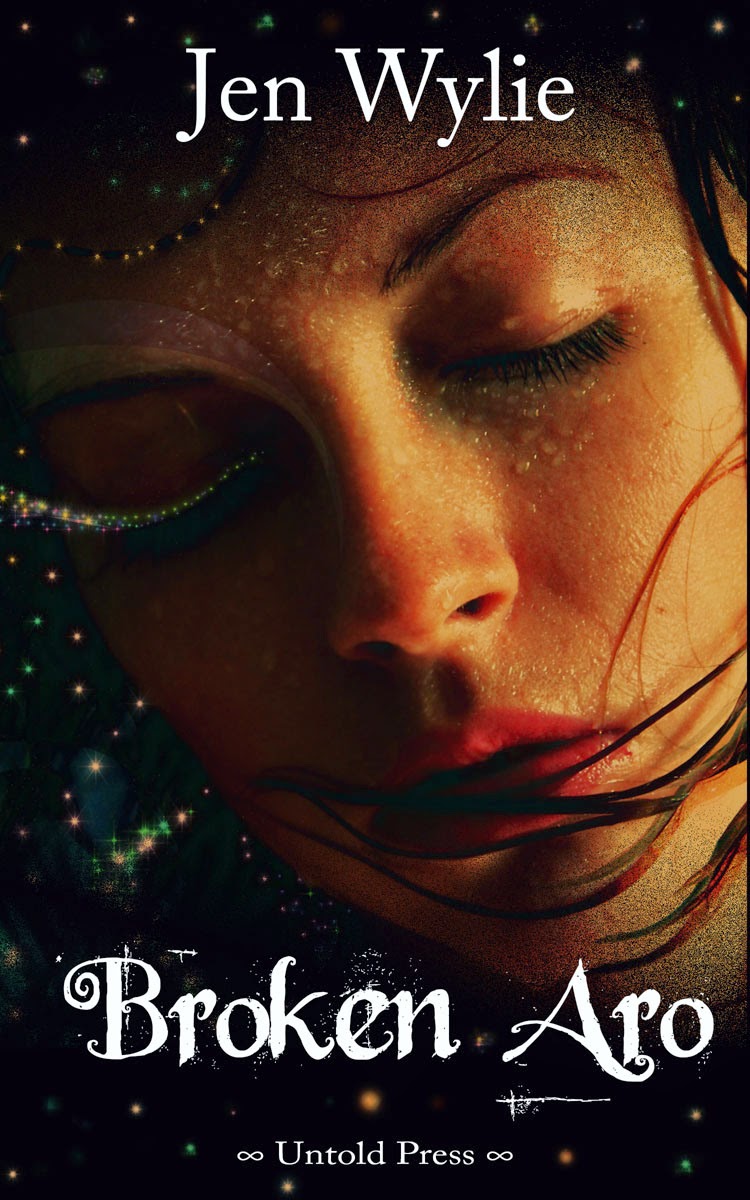 Open your eyes to darkness. What do you
see? Does the darkness frighten you? Now imagine the darkness being the cargo
hold of a slave ship. Your city has fallen. Your family is most likely dead. You
don't know anyone around you, and some of them aren't even human. Giving up
would be so easy to do, but not for Arowyn Mason. Not after being raised in a
military family with seven brothers. Every great story should begin with a
plan. Aro's was to escape and to survive.

Escape comes, but at a price. As they reach the shore, Aro and the other
survivors learn that freedom doesn't mean safety. The slavers want their
property back and will do anything to get it. The party uses every ounce of
their brute strength, a hearty helping of cunning, and even ancient magics to
keep themselves alive. Sickness, danger, and even love surprise them at every
turn. Dealing with danger becomes their way of life, but none of them ever
considered that nothing can be quite as dangerous as a prophecy. Running turns
into another race altogether as her world falls to pieces again and again.
Excerpt 1
Her eyes opened to darkness.
She wasn't surprised. When bad things happened and you finally opened your eyes it was always dark wasn't it? Because otherwise when you woke up you wouldn't be scared, not right away, not until you remembered. Yet in darkness nothing else could be seen but the memories of what had happened, it didn't matter if you opened your eyes or kept them squeezed closed.
What happened…
She closed her eyes again, not against the memories, but the sudden tears and choking sobs. Still, she tried to not remember, but her head hurt. All of her hurt, but her head hurt the worst. She'd been hit by something, very hard. She had no trouble remembering the pain. She remembered falling to the ground, her brothers screaming her name over the insane loudness of the fighting and everything fading to nothing as darkness claimed her.
She sucked in a deep breath. The fighting. Yes, the city had been attacked. The walls had been breached. There had been fighting in the streets. She had been fighting. Her brothers had been trying to get her out. They had been so close. Had they?
She shifted and froze, terror creeping up her throat and choking her at the same time until nothing but a strangled gurgle came out.
They had not.
She knew because she felt the cold metal shackles around each wrist, felt the weight of the chain between them. The same fetters bound her ankles. Dirty straw prickled her cheek and the other smells of her surroundings overcame her. They overwhelmed her and made her gag. The rank scents of piss, shit and vomit almost covered the stale reek of sweat and the tang of salt.
Salt.
She'd thought her head had just been spinning, but no, everything moved, lurching and swaying. She was at sea.
At sea in chains meant only one thing. The rumors had been true. The Gelanians had allied with the Franuan Slavers. Beneath the combined attack, Kingsport had fallen and the Frans had taken their cut, citizens to sell as slaves. She was a slave.
Well that sucks. 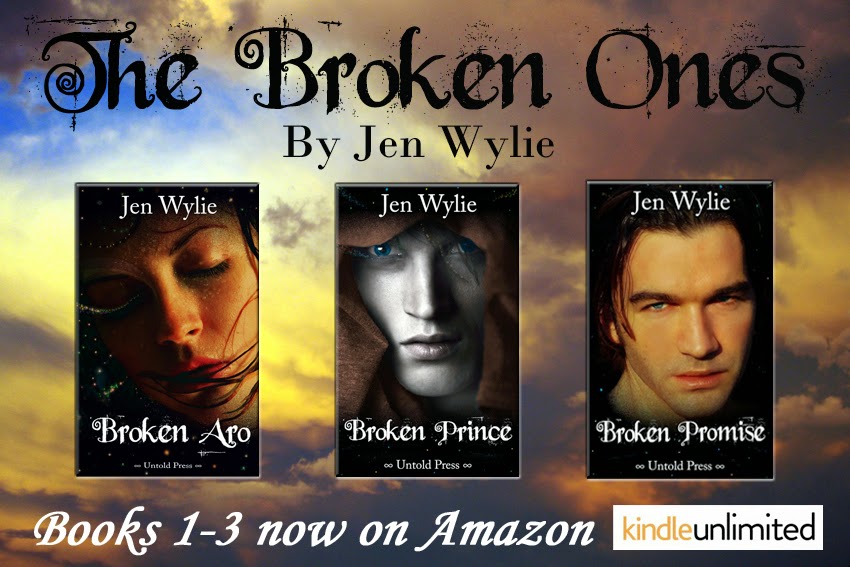 ***
Untold Press is offering review copies of Broken Aro (The Broken Ones #1) by Jen Wylie for interested bloggers.  Review copies are available in Mobi and ePub formats. Review copies of book one are also available.  Please only sign up if you are interested in providing a review.  Read the terms below before signing up.


Terms:
-By signing up, you agree to read and review within 2 months of receiving book.

-Please also post your review to Goodreads/Amazon/etc. in addition to your blog.
-Review copies will be sent directly by YA Bound Book Tours.

-Signing up does not guarantee you will receive a copy.

-Review copies will be sent on a bi-weekly basis (depending on sign ups). 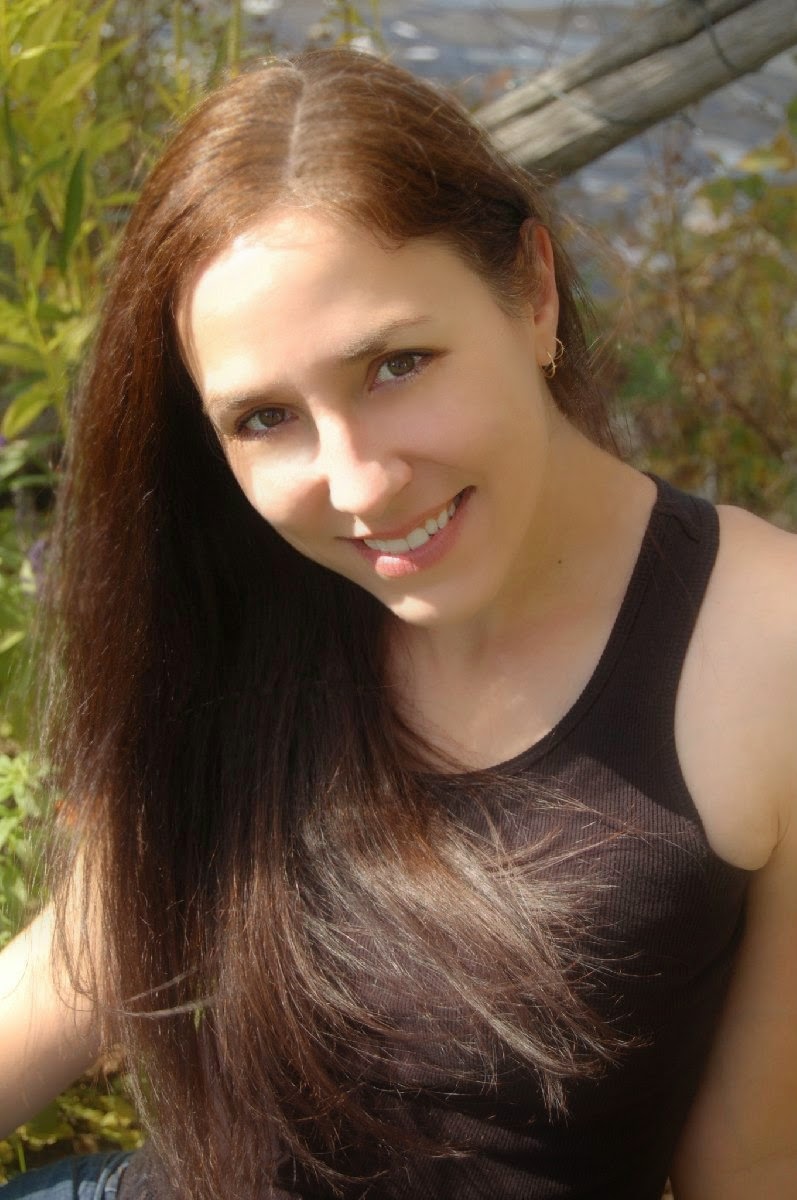 About the Author
Jen
Wylie was born and raised in Ontario, Canada. In a cosmic twist of fate she
dislikes the snow and cold.

Before settling down to raise a family, she attained a BA from Queens
University and worked in retail and sales.

Thanks to her mother she acquired a love of books at an early age and began
writing in public school. She constantly has stories floating around in her
head, and finds it amazing most people don’t. Jennifer writes various forms of
fantasy, both novels and short stories.

Jennifer resides in rural Ontario, Canada with her two boys, Australian
shepherd and a disagreeable amount of wildlife.