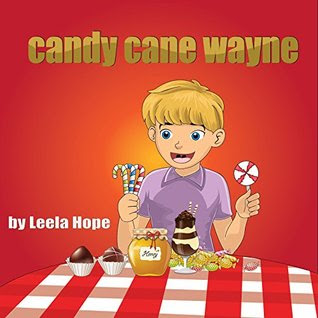 GoodReads: This is a charming tale about a boy named Wayne who much preferred eating candy over healthy greens.
He is always tired and has no energy to play. And try as she might,
his mother can’t convince him to eat his vegetables.
Follow along as he accepts an invitation for tea at his friend’s house and makes the discovery much more than tea is being served.
Will Wayne have a change of heart and decide to try something new?
Candy Cane Wayne entertains with lively, colorful illustrations and rhyming verse, while sending a positive message to your children about healthy eating.

Mine: I’m right there with Wayne, not a big veggie eater either. Although Wayne finds that he can’t keep up with his friend. His friend has lots of energy and eats veggies and Wayne doesn’t. He’s invited to eat at his friends and veggie are served.

Wayne finally tries some veggies and decides they aren’t so a bad after all. He had the energy to keep up.