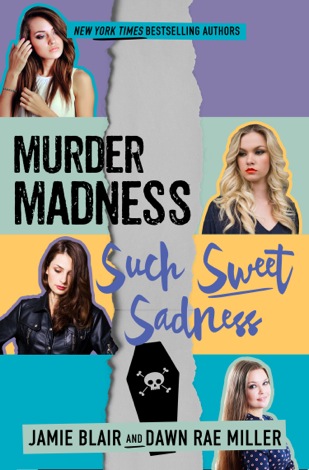 A murderer is loose on the FU campus, and despite their best efforts, the police are nowhere near making an arrest. It’s beginning to look like Jackson’s murderer may walk free — until someone calling themselves The Fifth begins threatening each girl.
Suddenly, The Fifth starts revealing the girls’ darkest secrets:
Reggie is the campus drug dealer, Livie is a kleptomaniac, Haddie hasn’t remained a virgin, and Val is struggling with her sexuality.
With no option but to work together, the girls dive deeper into Jackson’s web of lies, and hope to unmask The Fifth while solving the mystery of Jackson’s death.
The more answers they get, the more dangerous life at FU becomes — not just for the girls, but for the people they love the most.
Which makes a girl wonder, who’s next on the murderer’s list?

Previous book in the series (click on image for Goodreads link):

Jamie Blair-
Jamie Blair lives in Northeast Ohio with her husband, their two kids and a cat that broke into their house and refused to leave. She won a young author's contest in third grade, but it probably shouldn't count since her mom wrote most of her entry. LEAP OF FAITH is her first novel. She promises her mom didn't write one word of it.
Author Links:

Dawn Rae Miller-
Dawn is a Twitter and fashion addict whose favorite things in life are her family, gorgeous dresses, tea leaf salad, and French macarons. She splits her time between San Francisco and Northern Virginia, and is always up for a trip to Paris.
Author Links: