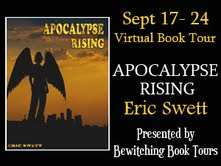 I am the husband of Tracy and the father of Zachary and Connor (with a third one on the way). I work in the IT industry and I am a recent transplant to North Carolina. I lovesall things science fiction and fantasy and openly claims the title of geek.


1. Who or what inspired you to become a writer?
I suppose if I had to pick one thing it would be Dungeons and Dragons. I started playing in third grade and I loved the storytelling aspects of the game. I didn't start writing fiction really until after high school. I would get bored with some of my classes and just start writing little short stories. I didn't try my hand at novels until I took a class on it. From there it was sort of a casual flirtation with being a writer until I lost my job and had a bit more time to spend working on it. That is when becoming a writer really turned into something I wanted to become


2. How long did it take you to write Apocalypse Rising?
It took a little more than a year. I actually started writing it as an exercise where I wrote 100 words per day, every day. When I hit the one year mark I decided that I really liked the story and cranked up the pace until it was finished.


3. While writing how many times do you go back and rewrite a plot?
I do it only a few times really. Apocalypse Rising was revised only a couple times, but another work in progress I have is in the process of its fourth major plot revision.


4. You run into a bookstore, where do you go first?
Nowadays I head to the children's section first because I have my kids with me, but when I am looking for my own reading I'll go to the science fiction/fantasy section.


5. How many books in a month do you tend to read?
Normally, three or four. Sometimes more, but a lot of the non-indie books I read tend to be pretty mammoth in size.


6. In all the books you've read. Who is your most favorite character and why?
Yossarian, from Joseph Heller's Catch-22. What could be better than a man trying to make sense out of a world that has lost its mind? I love the way the character's mind works and how he copes with the madness around him. He is one of the most tragic heroes I have ever read.

7. State 5 random facts about yourself.
1. I would gladly give up television. 2. I drive like an old person now, but my wife would disagree. 3. I have never left the country. 4. My favorite comic book character is Spider-Man. 5. My favorite beverage is chocolate milk.

8. Your favorite Genre?
Science Fiction, at least for right now.

9. What are you currently reading?
Todd Maternowski's Exmortus 2: Temples Diabolic. It is a gritty, brutal fantasy novel.

10. What is the best book you've read?
Man, that is one tough question. I would say the best I've ever read was Battlefield Earth by L. Ron Hubbard. It is huge and I am left physically and emotional exhausted by the time it is done, but I love it.

11. Any new projects coming up?
I am working on the sequel to Apocalypse Rising at the moment. I plan to have it finished so that I can write another book during NaNoWriMo in November.

Apocalypse Rising is the story of a fallen Angel who witnesses a brutal murder. He and his friend, a heroine addicted prostitute, must flee for their lives from the powerful businessman and his otherworldly servants if they are going to survive. Along the way the Angel realizes that he must regain his faith if they are going to have any chance at all.

As for why readers should pick it up, well it is a quick-paced read and at sixty-thousand words it is a great weekend book. There is suspense and betrayal mixed with a heavy dose of action.

Long ago, an Angel surrendered his memories and his power when he left Heaven behind, so that he could make a difference in the real world. A couple thousand years walking amongst the teaming masses of humanity has left him disillusioned, but he refuses to give up. He spends his time with the forgotten souls of an urban slum, making a difference wherever he can.

When Justin witnesses the brutal murder of a woman at the hands of a ruthless business tycoon, he must run before his eternal life is cut short. Justin must swallow his pride in order to save himself, and the one friend he has left. The journey back to the fold is filled with danger and discovery as he finds himself in a race towards the end of the world. 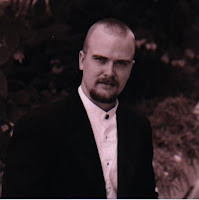 Eric Swett started writing a story at 100 words a day in the spring of 2011 as an exercise while he worked on his novel. One year later and that exercise turned into his first novel, "Apocalypse Rising."

He is the husband of Tracy and the father of Zachary and Connor. He works in the IT industry and is a recent transplant to North Carolina. He loves all things science fiction and fantasy and openly claims the title of geek.