I’ve had to do my share of rewrites since stumbling my way into becoming a published author. A chapter here and there, a slight plot change and is a normal part of writing. Sometimes the translation from my brain to the pages doesn’t quite equate when someone else reads it, I get that.

When I wrote the first book in the Animal Trilogy, it wasn’t just my first go at writing a shifter story, it was the first time I found out what real rewrites were.

When I began writing Heart, it was in third person POV (point of view). I was a quarter of the way through when I decided I wanted try it in first person. I know that most readers relate better to third person stories, seeing things from all the characters instead of one, but I still continued and rewrote the whole thing. While I was writing it in that point of view I was able to grasp the characters sense of urgency and emotion much easier. The rest of the book just flew onto the page.

When the publisher read it, they liked it but had one request — change it to third person. So after a few hours of reading through it and seeing it in third person I agreed to do it. How hard could it be to take a completed story and write it line by line in another perspective, right?

I literally pasted the entire manuscript into a blank document and began one line at a time. Of course I had to change many scenes when I did this…and I will admit (now) that they are much better for it. Having to go through word by word and take all the I’s and me’s and change them to she and her or him and his wasn’t just challenging, but tedious. I can say that I know this story inside and out as well as backwards now. My editor even forgave the few instances of first person still lingering after the resubmission of the new completed version of Heart.

Am I happy I did this?

You betcha! The four and five star reviews just keep coming in and I’m thrilled that everyone is finding it a refreshing change for a shifter story. Just wait until you see what I have planned for Scent, the second story in the Animal Trilogy.

You can only hide for so long before fate steps in…

Three women without knowledge of their true heritage...

Three men have waited for their mate all of their lives...

Hearts and tempers collide with wild passions and animal instincts. 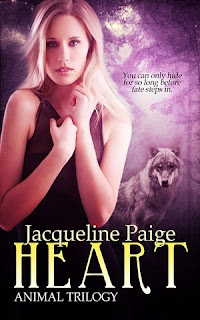 Torn from her sheltered life, Rayne is alone and scared after she discovers her fiancé is not the man she thought he was. Unable to accept the corrupt world he belongs to, she flees to the furthest possible location she can reach on her own. Nothing could ever prepare her for the journey and what she finds when she arrives.
Is she strong enough to survive on her own?

The epitome of the lone wolf, Devin stays in the wilderness and far away from people, avoiding the decision of whether to accept his title as leader and alpha of the pack. One alluring woman stirs his resolve and passion when she disturbs his solitary world. The man inside is tempted in a way he can’t understand but his wolf knows he’s found his mate.
Can he have her without succumbing to the responsibilities waiting for him?