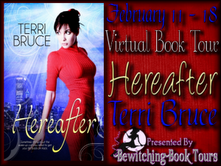 Suddenly, as if out of nowhere, a boy appeared in her path. She veered around him and then skidded to a halt, something about him making her stop. She turned around and realized he was staring at her, his face a mask of astonishment, his mouth hanging open.
“Hey kid, watch where you’re going,” she said, more surprised than annoyed.
He was maybe fourteen and nearly as tall as her, at that “beanpole” stage, as her grandmother had called it—the tall and scrawny look of one growing too fast. What little of his face visible under a curtain of straw-colored hair was pointed and sharp—cheekbones, chin, and nose. His hair, cut in an asymmetrical bob that left it longer in the front than the back, was parted on the side and hung in his face, concealing his left eye. Somehow, the way one washed-out hazel eye was visible and the other hidden reminded her of Pete, the dog from the Little Rascals.
She realized he hadn’t moved a muscle and was still staring at her gape-mouthed.
“Did you hear me?” she asked.
He gave a little shake of his head, as if he was doing a double take. The motion caused the curtain of hair hanging over his eyes to sway. “Yeeesss,” he said in a slow, cautious, drawn-out way.
“Why are you staring at me?”
“Well, it’s just, because…you know. You’re…” He trailed off.
Irene narrowed her eyes. “I’m what?”
The boy turned beet red and took a step back, giving a hard gulp that made Irene fear he had swallowed his tongue. “Well…dead,” he stuttered.
Irene looked around sharply, scanning in both directions. She expected to see kids jumping out at her with squirt guns. It sounded like the kind of thing they’d do. They would soak her and shout, “Ha ha, got you! You’re dead!”
Only there was nowhere to jump out from. There was Mister MacKenzie’s lawn, cut with Stepford-like precision in one direction and the Robellas’ confusion of flowers, which had progressed from neat raised beds to riotous English cottage garden to tangled jungle over the years.
Irene turned back to the boy and looked him up and down with a critical eye. He didn’t look like a troublemaker—he was dressed neatly in khakis, a long-sleeved T-shirt, and sneakers. The exposed wrists and ankles—the telltale signs of a boy growing too fast for his clothes—and the dusting of freckles across his nose helped to cement an air of vulnerability and sincerity. She pursed her lips.
“Okay, you know what, smart ass? I’m having a bit of a personal emergency at the moment. My mother is having a stroke or something. You might want to remember that next time you decide to try and play a joke on someone.” She turned away, ready to move on, but his voice, vibrating with hurt, stopped her.
“It’s not a joke. You’ve got the…the…aura, like the book said. That means you’re dead.”
“I what?” Irene’s voice rose in disbelief. Reflexively, she looked down at herself. There did seem to be a faint flicker around her, a pearly blue-white, sparkling like faded opals. Her heart began to beat faster. She spun around.
“What the…? Did you put something on me?”
He blinked at her, surprise opening up his face, and his mouth formed an O again. “So, you don’t know that you’re dead? Huh.”
“I’m not dead,” she cried, throwing up her hands again. “Stop saying that!”
Some of his surprise seemed to have worn off and now he studied Irene with relaxed interest, seeming to assess her much the same way she was assessing him. He balanced on one leg and scratched the back of it with the sneakered-toe of his other foot.
“I’m really sorry,” he said, and he really did sound sorry.
For some reason, his sympathy frightened her more than anything else. She backed away, shaking her head in disbelief. Then she whirled away from him and fled, racing for home.
Behind her, she heard the sound of sneakers slapping pavement. She looked over her shoulder and saw the boy, at an unhurried pony-trot, following her.
She slowed as she approached her driveway. The boy came to a halt beside her.
“Stop following me!” she said, but exasperated, as if to a stray dog, instead of afraid. Somehow the scrawny, pale, interested boy was about as frightening as toothpaste.
“Car accident, huh? That sucks.”
She stared at him. He was studying her house and yard with the same rapt fascination with which he had regarded her.
“What? What are you talking about?” However, as she looked at her car, she could see that it, too, had the same pearly, blue glow that seemed to surround her.
The boy shook his head. “I’m sorry,” he said again.
“I’m not dead!” she shouted in exasperation, but her heart was thumping uncertainly.
“Then how did you end up on the side of the road?” a small voice inside her head asked.
He frowned at her. “You didn’t kill yourself did you?” he asked doubtfully. “I heard how you can kill yourself by sticking a hose from the tailpipe into the car—”
“Of course I didn’t kill myself! Jesus!” She shot him a look of deep disgust. “And I’m not dead!” Despite her words, the sinking feeling in the pit of her stomach worsened as she looked at her hands and arms again, confirming that the weird glow was still there.
Something dark in the grass of Jamaica’s yard caught her eye. Kitty was lying with his head cushioned on his front paws, a droopy, depressed look on his face. Jamaica must be home.
Squaring her shoulders and shooting the boy another look of reproach, she marched up Jamaica’s front walk. “I’ll prove it,” she said.

Why let a little thing like dying get in the way of a good time?


Thirty-six-year-old Irene Dunphy didn't plan on dying any time soon, but that’s exactly what happens when she makes the mistake of getting behind the wheel after a night bar-hopping with friends. She finds herself stranded on earth as a ghost, where the food has no taste, the alcohol doesn’t get you drunk, and the sex...well, let’s just say “don’t bother.” To make matters worse, the only person who can see her—courtesy of a book he found in his school library—is a fourteen-year-old boy genius obsessed with the afterlife.

This sounds suspiciously like hell to Irene, so she prepares to strike out for the Great Beyond. The only problem is that, while this side has exorcism, ghost repellents, and soul devouring demons, the other side has three-headed hell hounds, final judgment, and eternal torment. If only there was a third option…


Terri Bruce has been making up adventure stories for as long as she can remember and won her first writing award when she was twelve. Like Anne Shirley, she prefers to make people cry rather than laugh, but is happy if she can do either. She produces fantasy and adventure stories from a haunted house in New England where she lives with her husband and three cats. 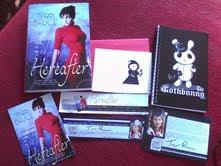