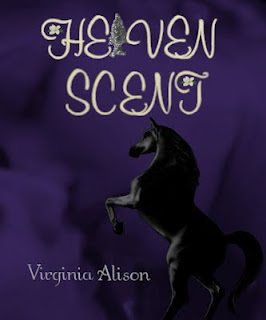 Where to start? The question is the easy bit the answer is still unknown.

The Heaven Scent Trilogy is the culmination of a years’ work, which all started with a poem. In July 2011, I met a Cowboy online, from Texas and yes, one of those meetings where you feel you have know this person all your life. Three weeks later he sent me a poem called –On Finding Someone- by Joel Nelson the Cowboy Poet, and I immediately saw a story in it.

If on some better than average day
I should be riding along
Observing—not expecting—well maybe
And should see just as hoof swept by
One flawless arrow point—
If on that bright shining morning
I should step down to lift this point
Turning it delicately—feeling its smoothness
Beneath my fingertips
I would marvel at its perfection
At the way some ancient one
Had tempered and crafted such beauty
At how it came to lie there
All these centuries—covered—uncovered
Re-hidden—re-exposed
Until it came to me
To happen by this place
On this day made now more perfect.
And I would ponder such things
As coincidence and circles and synchronicity,
And I would pocket this treasure near my heart,
And riding on I would recall
Having seen such treasure as this elsewhere
But not this one—not this one.
And for one brief moment I would stiffen with fear
At how one quick glance in another direction
Could have lost this to me forever,
And I would touch my shirt over my heart
Just to make sure.
With permission of © 1998, Joel Nelson

I began writing, the ‘chapters’ just poured out and ten days later had over 20,000 words, at which point said Cowboy disappeared. I duly put the short story onto my website www.breathlessnights.com , which I co-own with Keith David – my writing partner of three years -and started writing something different. Within a month an editor, who I knew from Facebook, messaged me and suggested I make the short story into a novel. It took me about two weeks to look at it again but eventually thought ‘what the heck, in for a penny, in for a pound.’ (Good old English idiom haha) Removing the last 1000 words to keep for the ending, I began filling in the middle.
It took until September to complete the novel. When finished, I decided that the book would benefit from having the poem printed in the front so set about finding the poet. It did not take long and after a few emails and phone calls, he kindly agreed to let me use the poem in the book. Joel also suggested that I attend the ‘Cowboy Poetry Festival’ in Alpine Texas at the end of February. That thought appealed even though I live on a little speck in the Atlantic Ocean known as Madeira Island – over 5000 miles away! Needless to say, not only did I attend the event, I also wrote two more books before I left for the USA, which made up the trilogy.

The Festival was an emotional time. I felt as if I belonged in that little Cowboy town situated in the middle of nowhere in West Texas. During my time there, I discovered all sorts of coincidences pertaining to the book. I described places I had never seen, people I had never met; it all became a little spooky. By the time I got back on the coach five days later, I had decided to buy a house there.

I arrived back on the island and this is where things went downhill. I asked my husband of thirty-two years for a divorce and put my house up for sale. My friends thought I had lost my mind, my family thought I was having a mid life crisis.
In July, I returned to Alpine with my daughter and mother in tow. They understood why I loved the place, which was a bonus and have supported me with my decisions. Joel and his wife are now great friends and I look forward to returning there soon.
So here I am, my life turned upside down because of a poem. I published the first book on Amazon on 31 October 2012, second on 1st December and third on 15th December and the Trilogy came out as one book on the 23rd December. Something is telling me to do this, I do not know why; I am just going with the flow.

They say people come into your life for a reason. The unknown cowboy who sent me the poem did just that however, the person I owe everything to is Keith, I could not have done this without his constant nagging, poking and support. I am in the process of writing and editing a Vampire Erotica Trilogy, the first book of which I will publish in January 2013.A fourth ‘Cowboy’ book is now on its way, based on another of Joel’s poems called ‘The men who ride no more’. I wonder where this one will take me… 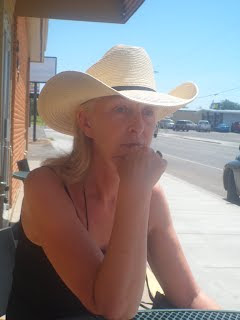 Born in Bournemouth, England, Virginia’s gypsy heritage led her to a rather unusual childhood. Her father worked within the oil industry and she spent much of her younger years travelling. Schooled in several countries until the age of eight, and fluent in several languages, on attending boarding school in the UK, she found delight in the extensive ‘English’ library, and her love of reading was born. From there the travelling continued, around the UK, Wales and then finally finishing in Canada, where she attended, and graduated from St John High school in New Brunswick. Her love of the English language was due partly to the inspiration of her English Tutor. An Oxford Don, he despaired of the American/English idioms, and as she was the only English student in the school, found her a delight to teach.

Spending another year in working in Canada, life then returned her to England and on to the remote Shetland Isles for three years. Following her return to the UK, she threw herself into floristry for fifteen years, and her artistic talents took another turn when she picked up a pen for the first time to write her first dragon fantasy novel. It took another ten years and the passing of her artistic father, to discover her talent for painting. Setting out on a new path, she now paints celebrity portraits to raise money for charities. Through Face book in 2010 she met a friend who encouraged her to take up writing again, shortly after this inspiration which rekindled her spiritual beliefs, she met her (writing collaborator and co-conspirator) Keith David. They now combine their sensual words drawn from the depths of their souls, to captivate the imagination, and entice the reader to discover their innermost desires.

Amazon Heaven Scent the Trilogy
Posted by SueFitz at 12:16 AM