Author Interview: The Coven: Fire and Ice by Verdell Walker 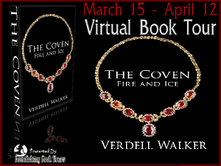 The Coven: Fire and Ice
The Coven, Book 1
Verdell Walker

After her clique's bullying causes a classmate's suicide, Kat Grey trades the vicious world of the California "in crowd" for the chance to become a better person in Massachusetts. But when she steps in to protect a classmate from being bullied, Kat sparks a war with Hannah, Milton Academy's resident Queen Bee.

Kat's courage and compassion attract the attention of Blaze Ward, Hannah's ex-boyfriend. As they fall in love, Kat discovers that Blaze is more than the boy next door. He's a warlock. He is also the leader of an in-crowd like no other - the Brotherhood, five young warlocks charged with defending witches and humanity from a demonic adversary named Seth.

Kat challenges Blaze to become a better man and leader while he helps her find redemption as she makes it her mission to stop bullying at Milton. But when Hannah teams up with Seth to destroy her, Kat becomes a hostage in the age-old war between the Brotherhood and their greatest enemy. Saving Kat will require more than Blaze's strength and skill; it will mean breaking one of his kind's most sacred laws. Blaze will have to make a choice: his honor or Kat's life.

Little Blurb about yourself: I grew up in the Deep South. I’m an avid sports fan and absolutely devoted to the Green Bay Packers. Few things make me happier than making a meal for my family and friends. Except for writing of course!

I honestly can’t attribute it to any one person or thing. It’s my love of the craft. I’m a storyteller. I enjoy building worlds and creating characters. For me, it’s never work or a chore. I deeply and sincerely love my art.


2. How long did it take you to write The Coven: Fire and Ice?

All in, it took about a year. I spent three months planning it, four months writing, and another three editing and rewriting.

I would put the number no higher than one time. That’s because I’m an outliner. I devote a lot of time to plotting my books before I even start writing. I plot chapter by chapter. It’s nothing super detailed, just the highlights of the plots. I always like to know where I’m going. I find it easier to let the writing flow once I know the direction I want to take.

The cookbook section – I love cooking and baking!

I usually get about 1 a month in because I’m so busy with my day job and writing my own books.

Catherine, from Karen Cushman’s “Catherine, called Birdy.” That book really resonated with me when I was a kid. Birdy reminded me of myself. She loves books, is hyper-observant about the world around her, and hates it when others try to fit into a mold she knows she doesn’t fit in. Plus, Birdy has a wicked sense of humor! I’m so glad I checked it out that day in the library because I didn’t feel so alone anymore after I’d read it. It was my first inkling that another girl like myself existed.

7. State 5 random facts about yourself.
• I’ve been training in belly dance for five years.
• I speak Spanish, Arabic, and Mandarin.
• I have seen all the James Bond films.
• My favorite TV show is Xena, Warrior Princess.
• In addition to sprinting in college, I also competed in the hammer throw.

8. Your favorite Genre?
Historical fiction, primarily of Europe and Asia.

I’m reading “A Discovery of Witches” by Deborah Harkness, ironically. I’ve wanted to read it for a while since I’ve heard nothing but good things about the book.

Oh man, what an excruciatingly difficult question! It would be a toss-up between “Pride and Prejudice”, “Let the Right One In,” and “The Namesake.”

I’m working on Book Two as we speak – it will focus on Cody Quintana. I’m shooting for it to be available early next year. In all, I’m planning five books to be in The Coven series, each one focusing on a different member of the Brotherhood.

If you’re looking for a paranormal YA romance that doesn’t feature cookie-cutter characters, then The Coven: Fire and Ice should be at the top of your To Be Read pile. Fire and Ice has amazing feats of magic and an engrossing love story between two strong, unforgettable characters, Kat and Blaze. You won’t be able to put down this story of a gifted warlock and the girl who is every bit the hero that he is. Get ready to fall under the spell of Fire and Ice.

Verdell Walker is the author of THE COVEN series. Born and raised in the South, writing has been her escape from reality for many years.

Verdell is an avid sports fan and absolutely devoted to the Green Bay Packers. A gifted cook and baker, few things make her happier than making a meal for her family and friends. Except maybe writing about her favorite boys.