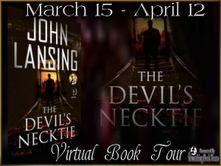 Blurb: John Lansing started his career as an actor in New York City. He spent a year at the Royale Theatre playing the lead in the Broadway production of “Grease.” He then landed a co-starring role in George Lucas’ “More American Graffiti,” and guest-starred on numerous television shows. During his fifteen-year writing career, Lansing wrote and produced “Walker Texas Ranger,” co-wrote two CBS Movies of the Week, and he also co-executive produced the ABC series “Scoundrels.” John’s first book was “Good Cop, Bad Money,” a true crime tome with former NYPD Inspector Glen Morisano. “The Devil’s Necktie” is his first novel. A native of Long Island, John now resides in Los Angeles.

I didn’t grow up dreaming about being a writer. It wasn’t even on my short list. But now in hindsight I do think writing books was a natural evolution from my time spent working in Hollywood.

Writing my first script was actually a fluke. I had committed to directing a short film. My friend, Spencer Eastman, a wonderful screenwriter offered to write the script that I would then produce and direct. Tragically, Spencer got sick and I was forced to fend for myself. Write the script, or give up the project.

Writing that short film was a turning point in my life. I discovered the joy of creating a work instead of interpreting, and it led to a writing partnership and many fruitful years of television work.

My acting career helped inform the characters I wrote for, and about, and created, in my television work. The craft of acting helped me understand the emotional roadmap needed to flesh out complex characters, characters that will hopefully be compelling enough to maintain a reader’s interest.

My television work taught me discipline, writing on a schedule, collaboration, and it really hammered home the type of characters I enjoyed and wanted to invest my time with, characters that were interesting enough for me to spend a year of my life with, and again, hopefully keep an audience reading. Only you can tell me if I’ve succeeded at that and I look forward to hearing your thoughts.

2. How long did it take you to write “The Devil’s Necktie?”

I think a banged out a rough first draft in about seven months. But the entire rewriting process, working with my editor, and then my copy editor, extended the schedule to a full year. It was one of the best years of my life.

3. While writing, how many times do you go back and rewrite a plot?

Writing a television episode, I always had a concise outline in hand. You needed a strong map because there were times you had to knock out a script in a week. There was no time for changes, because of production constraints.

“The Devil’s Necktie,” is my first novel. And for the first time in my career, I was flying without a net. No outline. I started with a premise – one night of passion for retired Inspector Jack Bertolino sends him on a deadly collision course with his past – and let it roll.

I found that in the rewrite process, I moved scenes around for increased tension and pacing, but I didn’t really change the overall plot.

Directly to the Mystery section.

When I’m not writing I usually log three or four books a month. When I’m working
on a new project, I’m very careful about what I pick up. I don’t want to run the risk of getting on someone else’s wavelength.

6. In all the books you’ve read, who is your most favorite character and why?

That would have to be, Dave Robicheaux, in James Lee Burkes novels. It’s because
Robicheaux is a tortured man with artistic sensibilities, who struggles with his past, his present, and worries more about the people he loves than himself. He possesses a strong moral compass, but has enough demons to bury a lesser man.

I like eighteen-year-old Macallan.
I make meatballs that float.
I want to get back to Italy.
I put together a rock band and played at CBGB’s in New York City.
I rode my motorcycle up the California coast.

I’m two hundred pages into my next Jack Bertolino book. It’s called, “Working the Negative.” Jack grew up in a Staten Island neighborhood populated with “made men” and friends of the Mafia. He cut all ties with the dark side when he entered law enforcement and thought he’d left his past securely behind when he moved out to California. But not so quick. Now that he’s retired, Jack finds himself owing a favor to a mob boss who may have saved his son’s life.
It’s a request Jack can’t refuse.

A Sizzling thriller for fans of James Patterson and Patricia Cornwell. An exciting tour into the real-life world of cops, crime, and murder. Retired inspector Jack Bertolino had strict rules when dealing with confidential informants. But Mia had the kind of beauty that could make a grown man contemplate leaving his wife, his job, and his kids. After a passionate night together, Mia is found murdered – and Jack is the lead suspect. Facing threats from the LAPD, the 18th Street Angels, and a Columbian drug cartel, Jack delves deeper into the seedy world of drug dealers and murderers and discovers that the top players knew Mia personally. And now Jack is torn between fearing for his life and seeking revenge for his slain lover…either way, the body count will rise.

John Lansing started his career as an actor in New York City. He spent a year at the Royale Theatre playing the lead in the Broadway production of “Grease.”

He then landed a co-starring role in George Lucas’ “More American Graffiti,” and guest-starred on numerous television shows.

The Devil’s Necktie is his first novel.