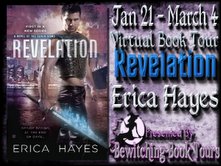 A fallen angel with a mission and a medical examiner who's lost her faith are fighting for their souls in a glittering, near-future Manhattan...

Blind faith is for fools. That's what Dr. Morgan Sterling believes. And she's going to prove it by curing the zombie plague ravaging her city's slums. She's certain it's not a sign of the End of Days, but a nasty disease—until an angel appears in her morgue in a flash of glory.

Luniel is not just a fallen angel. He's a powerful warrior sworn to fight evil in hopes of a chance at redemption. He's after the demon princes who are stealing the seven vials of holy wrath which, when perverted, will unleash eternal hell on earth.

To stop the plague, Luniel needs Morgan's help, and her faith. But Morgan believes science is their salvation. If the zombie plague is a demonic curse—and if Luniel is true—he’ll have to prove it. Even if he loses his heart to true love or his soul to Hell... 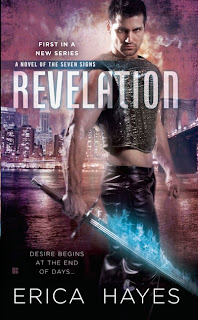 White light erupted, brighter than any flashbulb.
She gasped, dazzled. Breeze ruffled her hair. Her elbow hit the trolley, and the camera jolted from her fingers.
A hand gripped her arm, steadying her. A man’s voice, deep and unfamiliar. “Sorry, lady. I didn’t think anyone would be here. Are you—oh, shit.”
Her vision cleared, and she scrabbled on the floor for her camera. “Jesus, you scared the hell outta . . . oh!” She looked up, and fell right back onto her ass, her nerves in disarray.
Whoa. Not just tall, or big. More, in every way compared to . . . well, compared to a normal man.
This guy wasn’t normal.
Black hair, blacker than soot and wilder than music. Blue eyes, hotter and deeper than summer sky, luminous pale skin, long dark lashes any woman would kill for. Arms thicker than her thighs in a dark shirt with no sleeves, strong wrists that made her weak, hands that could crush rocks. And his thighs in those jeans . . . long, powerful, rippling as he moved.
His face was familiar, she realized. Those carved cheekbones and, umm, luscious lips. The bird man. Only Birdy was blond, and this guy was dark and . . . tasty.
His gaze lasered onto hers, relentless, and she shivered. He looked dangerous. Driven. Not a patient man.
Morgan scrambled up, struggling to keep her mind on the issues. This was Babylon, the psycho-killer capital. Well-adjusted guys didn’t break into morgues after-hours. But how Mr. Huge-dark-and-oh-by-the-way-totally-hot had gotten in here was beside the point. So was how easy it’d be for a guy his size to tear her limb from limb, or worse.
He’d seen Birdy’s body. She couldn’t call security. Not yet. Not before she’d preserved the evidence.
She licked her lips. “Um. Hi. I was just . . .”
He strode up to the trolley, and his fingers clenched the edge, hard enough to dent the steel. On drugs. That explained the crazy swirl in his eyes. “You found my brother,” he said stiffly. “I guess asking how he died is redundant.”
“Umm . . . he’s . . . well . . .” Morgan stuttered, unable to keep it in any longer. “He’s a frickin’ bird man! Who the hell are you?”
He turned, and to her surprise, he laughed.
Her guts melted, like warm honey, and she shivered again. So beautiful. So smooth and melodic. She wanted to press her thighs together, feel his tingling warmth . . .
Or not. Her indignation sparked. He hadn’t answered her question. Who the hell was he?
The guy with the Rohypnol laugh shook his head. “Bird man. Christ. You people. Never believe what’s right in front of you.”
“Sorry, but I’m a scientist. I believe what I can see.” Morgan folded her arms, defiant, and edged closer to the wall where the alarm button was. Screw collecting more evidence. This guy was seriously creeping her out, and it wasn’t just because he had her thinking about sex instead of squirting him with capsicum spray.
“You do, do you?” His gaze flicked to the alarm button, and back to her, and swift as the flashbulb he dived forward and grabbed her arm. “Then believe this.”
Light shimmered again, dazzling. And glossy black wings burst from his shoulders in a rain of golden glitter.


Morgan’s heart catapulted, and she gulped for breath. The golden light glimmered, and dissolved.
But his lush midnight feathers didn’t. And he held her, his body close in the heady scent of altar smoke. His whisper rumbled through her chest. “I’m sorry. I can’t let you call your security. You never should have seen any of this, but it’s too late for that now. My name is Luniel. That’s Ithiel, my twin. He’s an angel. And so am I.”
Morgan struggled, her mind blanking. It couldn’t be true. Not possible. She must be dreaming. Yet . . .
She wriggled, beating at his massive forearm. “Let me go!”
He let go.
She stumbled away, rounding on him. More fool him. Whatever this guy was, he wasn’t to be trusted. “Sorry. Not possible. I don’t believe in angels.”
“Not my problem.” The man—Luniel—shrugged, feathers ruffling. His accent was elusive, a mixture of exotic and familiar, like he came from no place in particular.
“It’ll be your problem when I call the cops, you freak.” The dude still wore a shirt with no sleeves, and the wings—his wings—fit easily into the cutaway space. Blacker than black, like soot, broader than his massive shoulders, and long, the tips of the feathers reaching to mid-calf. It looked so real.
Morgan’s mind stuttered. She must be dreaming. But if this was a dream, surely he’d be wearing white robes and a halo? Instead of all dark and smoldering and . . . and sinful, like some insane Mardi Gras biker?
She sidled backwards, towards her desk in the cutting room. A girl didn’t grow up in Babylon without learning some self-defense. Her pistol was in the drawer. Maybe she could get away, lock him in, call security. 9-1-1 was a waste of time, despite her threat. Resources were stretched, and police response to anything short of a terrorist plot in progress just didn’t happen.
Luniel stalked her, midnight wings flaring. “Freak? Wow. I’m so pleased to meet you . . . I’m sorry, what didn’t you say your name was?”
“I’m Dr. Morgan Sterling. This is my mortuary. You’re trespassing.” Behind an autopsy bench, a few steps closer to the desk.
He circled, leaning over the bench on two hands, muscles flexing. “As they say these days, Dr. Sterling: whatever. Tell me where they found my brother.”
She fumbled against the desk, feeling behind her. “Screw you.”
“Is that an offer? I’m touched.” His hot blue gaze drilled her, magnetic. “But not distracted. Come on, Doctor, it’s important.”
She ripped the drawer open and grabbed the pistol, leveling it at him two-handed and thumbing the safety off. “So’s this. Back off.”
“No.” He vaulted the bench with ease, landing silently before her on wafting wings. Careless of her pistol. Unruffled, like a panther facing a hissing pussy cat, some small, insignificant creature who posed no threat.
His delicious scent paralyzed her, a rich toffee sweetness. Her mouth dried. He was luminous, dazzling, too perfect to be real. Certainly too perfect to be telling the truth. “Get away.”
“Wait, let’s see. Umm . . . no.” He cocked his head, and reached for her hair, stroking it with one finger. “You’re very pretty, Morgan Sterling. Pity if that got spoiled. Tell me about my brother.”
Now her gun was trapped between them. Her hands quivered, her memory of defensive moves a blank. “Get away! I’ll shoot!”
“No, you won’t.” He wrapped her hair around his fingers, and leaned closer, sniffing her. “You’re a doctor. You don’t hurt people.”
“Don’t bet on it.” She inhaled, and squeezed the trigger. 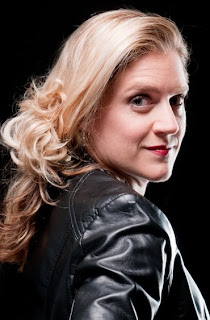 Erica Hayes was a law student, an air force officer, an editorial assistant and a musician, before finally landing her dream job: fantasy and romance writer.

She hails from Australia, where she drifts from city to city, leaving a trail of chaos behind her. Currently, she's terrorizing the wilds of Northumberland.