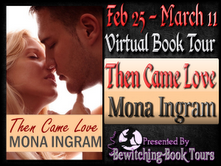 Hi Sue. Thanks for inviting me to stop by. I’m an incurable romantic with the best job in the world; I get to make up love stories. Or as I say on my twitter page, I take dictation from the voices in my head. Speaking of voices, they’re telling me to stop chatting and answer your questions...

Who or what inspired you to become a writer?
I’d have to say that my love of books came first, thanks to my mother. I spent many long and happy hours at the local library. The thought of story time still makes me smile.

How long did it take you to write Then Came Love?
This one came together fairly quickly. I generally think about them for a while before I actually sit down to write, and it virtually wrote itself. About a month, including edits.

While writing, how many times do you go back and re-write a plot?
I don’t think I’ve ever done that. I don’t write an outline, but I do visualize scenes in my head. I can often be found with my head down, staring at the keyboard as I visualize a scene. Somehow it comes out as words. Magic, huh?

You run into a bookstore. Where do you go first?
I’m such a consumer. I got to the best sellers. I’ve probably read the rest.

How many books a month do you tend to read?
On average, ten.

In all the books you’ve read, who is your favorite character and why?
My favorite Wilbur Smith book is called Blue Horizon. The young man in it is Jim Courteny, and I think he’s my idea of a real man. He’s an adventurer who knows who he is, and he loves deeply. Sigh.

State 5 random facts about yourself.
I’m a hockey fan. (Go, Canucks!). I lived in Paris for six months and didn’t go up the Eiffel Tower. I dislike turnips. I’ve seen wolves in the wild. My granddaughter is one of my best friends.

What are you currently reading?
In My Sister’s Shoes by Sinéad Moriarty. She’s a talented author and the characters leap off the page.

What is the best book you’ve ever read?
The Four Fires, by Bryce Courtenay.

Any new projects coming up?
Yes. I’m mulling over a trilogy, but it may be a while before I start. I want the stories and the characters to complement each other, but be stand-alone books with a clear-cut ending. I don’t like series where the reader is left hanging.

Here’s your chance to market your book. Describe it, and why readers should pick it up.
Then Came Love is a gentle romance story, with some uncompromising, realistic elements. Amanda, the heroine, is afraid of her husband, and falls in love with Jackson, an undercover RCMP officer. We’re not sure how she can resist him – we probably couldn’t – but she does, and we respect her for that. The secondary characters are charming and add a lot to an already compelling story. And, as I often do in my stories, I’ve tossed in a surprising twist at the end. I think you’ll enjoy it.

Mona Ingram was born in Ontario, Canada. Her family moved to British Columbia when she was twelve, and she can't imagine living anywhere else. In recent years she has lived in the Okanagan Valley and on Vancouver Island. In addition to reading and writing, traveling and bird watching are among Mona’s favorite pastimes.

Mona writes contemporary romance novels and takes great delight in creating unexpected twists and turns in her story lines. She frequently sets her books in areas which are familiar to her, immersing the reader in the setting. One reader recently commented that “after reading Fixing Freddie, I felt as though I’d been on a trip to Vancouver.”