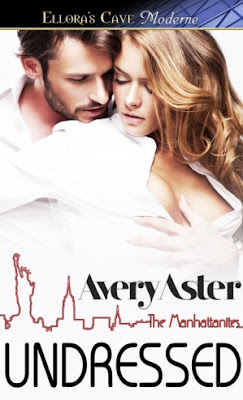 Inside Scoop: Though the hero and heroine remain monogamous, their Prada-wearing friends indulge in a ménage a trois and other fashionable sexual fun and games.
The Manhattanites is a series of full length novels focusing on relationships. Each book may be read as a stand alone. If you've enjoyed TV shows like Girls (HBO), Dirty Sexy Money (ABC), and The Bold & the Beautiful (CBS) then you'll love this series. Avery's characters are over the top. They have raunchy sex, speak their minds and the plots are twisted. (In a good way!) Manhattanites celebrate lust, ambition, and true devotion.
Read the first chapter of Undressed:
http://averyaster.com/contemporary-erotic-romance-free-read-prologue-for-undressed/
Read a dirty love scene from Undressed:
http://averyaster.com/chapter-scene-from-undressed-sweet-tiramisu-melts-in-your-mouth/
Watch the Undressed video:
http://www.youtube.com/watch?feature=player_embedded&v=HMlPay2nqgA
Midwest Book Review on Undressed:
http://averyaster.com/midwest-book-review-undressed-the-manhattanites-1-erotic-romance/
Learn what inspired The Manhattanites series from Avery Aster in USA Today:
http://www.usatoday.com/story/happyeverafter/2013/03/08/avery-aster-undressed-ill-take-manhattan/1971329/
25 New Yorker Insights Revealed After Reading Undressed by Avery Aster
Sex
§  Your vajayjay can take a guy’s cock 'n' balls…at the same time.
§  Always name your butt plug after Anderson Cooper.
§  Pre-ejaculation while jetting a plane over Italy causes turbulence.
§  Never let a dog sleep in your bed, especially three dogs. It’ll ruin your sex life.
§  If he’s as hung as an Evian bottle, it’s best to look away.
Money
§  Always retain the legal services of female lawyers, particularly ones named; Sarah Goldbaum and Hannah Goldstein.
§  Never allow your mother to spend your line of credit on a psychic from the Caribbean.
§  Sexual frustration leads to good business practices, enough to earn three hundred million dollars.
§  If Bergdorf’s, Barney’s and Saks Fifth Avenue reject your upcoming fashion collections try selling it to JCPenny’s or Kmart.
§  Use your American Express reward points wisely. You never know when you'll need to jet.
Life
§  Bellini cocktail consumption will induce foot fetishes.
§  Swedish Fish, Now & Later, and Gummy Bears from Dylan’s Candy Bar are perfect for your fuck-it bucket.
§  Everyone should be so lucky to have a best friend like Taddy Brill.
§  Never drive a Ford Thunderbird off a cliff thinking you’re Thelma & Louise.
§  Stay away from any woman named Scilla or Ottavia.
Fashion
§  Wearing Tory Burch ballet flats while racing a sports car may cause ones clitoris to hum.
§  Think twice before sitting Lady Gaga and Madonna next to one another at your fashion show.
§  Prada and a condom, when worn together, are known to make bisexual men go bonkbuster cra-cra.
§  Altering a vintage Valentino dress, formerly worn by socialite Nati Abascal, may land you on the red carpet.
§  We should all get "f'd" in Fendi.
Love
§  When in love, you can have as many orgasms as you like…in one day!
§  Slow dancing to Giuseppe Verdi enhances one’s emotional state.
§  Don't argue with your lover in public, above all—never in front of Anna Wintour, Marc Jacobs, or Karl Lagerfeld.
§  Playing Simon Says, in bed, may lead one to reveal their true feelings. So will strip dancing in front of him to the song Girls, Girls, Girls by Mötley Crüe.
§  And finally, he must always say, “I love you,” first.
Avery Aster