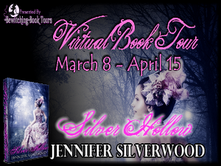 Amie Wentworth writes paranormal romances, not because she is looking for a degree in ectoplasm, but because she’s got bills to pay. Ever since her parents’ car crash, she has been led a reclusive life and trusted books more than people. Not even a letter from her long-lost uncle, begging her to visit, gives Amie incentive for anything other than ire – until she is stabbed in an alley and brought back to life by a mysterious stranger.

After crossing the Atlantic to her father’s homeland, Amie is dragged into the very sort of tale she is used to selling. Silver Hollow is a place of ancient traditions and supernatural dangers, where everything is the opposite of what it seems and few escape sane.

To make matters worse, the man who saved her life keeps turning up and her would-be-murderer is still at large.

But when she comes face to face with the ugly truth, will she too be sucked into her father’s madness? Or will she discover that madness is just another name for honesty?

The windows Amie passed on her mad dash back to her rooms betrayed the first glimpse of dawn. How her bare feet managed to take her back without getting splinters from the fallen wood beams or getting lost, she didn’t have time to dissect. Amie darted past the shadows, relieved when the West Wing was nearly behind her.
Home stretch, Wentworth! You’re almost there and you didn’t even last a week in track.
She grinned, touching the end of the feather sticking out of her robe pocket. This was her biggest mystery and most intriguing find. She wondered if any of the books Henry had put in her bookcase could shed some light.
Amie squinted and gasped when the distant candle light winked out of existence. The corner shadows literally moved to stand in front of her, blocking her vision. Confused and more than a little freaked out, Amie decided to just plunge through the gap. It had to be a trick of the eyes. She’d been awake most of the night, after all.
When she impacted the shadow, she realized too late it was hard as a brick wall. Within seconds she was flipped onto her back, the breath knocked out of her and the candelabra pooling wax onto the floor beside her head. She was too frightened to shout, flashbacks of the night she was attacked penetrating her mind. So she flinched when the shadows shifted and drew into her candle’s light to reveal the impression of a face.
Amie threw up her hands and scrambled backwards when the shadow reached to touch her. “Don’t come any closer! Get away from me!” she hissed, afraid to scream and wake the house. A part of her was still convinced this was a figment of her troubled imagination. Shutting her eyes, she willed the spirit to flee, then froze in terror when it spoke.
“Forgive me for startling you. I only intended to be certain ye were real, flying about the castle in yer nightdress as if ye had all the golems of the world at your back.”
“Your voice…” she whispered, blinked up at the source of the deeply masculine voice. “I feel like I’ve heard that before.” When he chuckled at her words she frowned, so he explained.
“I’ve been told a great many things by maidens far uglier and others with only a reflection of your true beauty, but never this. Tell me,” he said after a tense pause, where she focused on the reflection of her candle’s flames dancing in his black orbs, “what reason should a blood-filled woman have in the West Wing this night, lest she be a wight?” He was mocking her yet her curiosity won over her frustration.
“What’s a wight?” she asked and could have sworn his eyes shifted colors, from black to red to silver and then brilliant blue.
“A walking specter, milady, doomed to haunt its resting place forever.”
“I’m not a wight,” she said. For a long moment he said nothing, only peered intensely over her, until she felt the blackness would swallow her whole.
“Then neither am I, Jessamiene Wenderdowne,” he whispered, drawing back into the darkness. Amie’s heart was pounding, her blood racing. He shouldn’t have been able to leave so quickly. There were no other rooms past hers, no alcoves she had uncovered, or hidden passages to escape into. Yet as soon as his whisper was nothing more than a memory and his face had left her candle’s glow, she knew she was truly alone.

Jennifer Silverwood was raised deep in the heart of Texas and has been spinning yarns a mile high since childhood. In her spare time she reads and writes and tries to sustain her wanderlust, whether it's the Carpathian Mountains in Transylvania, the highlands of Ecuador or a road trip to the next town.

After attending three different universities without managing to square a degree, she decided to the next logical thing; become a writer. Always on the lookout for her next adventure, in print or reality, she dreams of one day proving to the masses that everything really is better in Texas.

She is the author of the Heaven's Edge series and Silver Hollow. To stay tuned, please have a gander at her website: http://jennifersilverwood.com