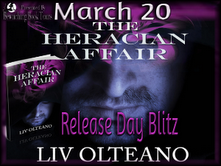 Even years after Rizzo Berg’s lover and Dom died in combat, the memories torment him. Following a particularly disappointing date, Rizzo goes to sleep in his apartment only to wake up on a spaceship with tall, gorgeous, alien Captain Conrad D’Ollet of Heracia, a man so deliciously dominant Rizzo’s knees turn to jelly.

Apparently the Heracians need help, and Rizzo is a humanitarian through and through. Spending more time around Conrad is totally not one of the reasons he wants to lend a hand.

Soon Rizzo finds himself completely conquered and blissfully owned. But neither he nor Conrad is willing to risk his heart, let go of the past, and dare to believe in a future that won’t end in catastrophe.

“From Chapter One:
[…]
“You’ve been teleported onto my ship. My porter wasn’t meant for humans. I need to check you’re all there.”
“Well, you should have checked before doing the tele-thingy. What if I’m missing a lung—or a ball? Not like you can pick one up and stick the part in now, can you?”
His clear eyes traveled over me again. “You look fine. Missing major parts would have become obvious by now. I can certainly think of one part you could have gone without, though.”
“Oh really? And that part would be…?”
Annoyance slapped me through his gaze. Cold yet intense, almost oppressive. If this guy was a figment of my imagination, I had been given some sort of upgrade in my sleep. A hallucination would never have that kind of gaze. My imagination just wouldn’t come up with that.
“We’ll just assume you’re fine, then. Won’t we, Riz?”
I sighed. “I hate to break this to you, GPS-boy, but we’re not friends yet. Try harder. I’m sure you can come up with something to bond over. Say, style and dresses.”
His lips twitched, but no smile came off it. “This is a regular Recuperator uniform. You’d do well to get used to it—there’ll be a lot of it around.”
“Okay, this is getting annoying now. If this is a dream, it’s high time I get up. You’ve completely killed my fantasy mood anyway.”
“You’re not dreaming. You’re on my ship, and I’m your Recuperator. From here until we reach the drop-off base, you’re my charge. After that, you’ll pester someone else. Behave, do as you’re told, and we’ll both get there with all parts in place.”
“Listen here, Skipper. Unless we’re sailing the Sea of Angst in your slinky sailboat, there’s no way I’m anywhere but in my bed having a weird dream. I’m not going with your plan here.”
His lips split in that small smile again. “About 80 percent of humans react like this to Recuperation. So you’re nothing special, Riz. Nothing I haven’t seen before. Let me enlighten you about your situation.”
I scoffed. “Sparky, you wouldn’t be able to enlighten if a light bulb was sticking out of your—”
He tsked. “Remember you’re my charge until drop-off. I decide if and when you eat, bathe, sleep. I’d advise you try to keep on my good side, though you probably wouldn’t be able to even if you wanted.”
“Ha. Ha. Really, stop it with the humor, it’s making my eyes shrivel up and die.”
He stepped closer, my autopilot driving me into the wall one step at a time. I tried to will my feet still but they just went on retreating me into a proverbial corner. When I had nowhere left to retreat to, the slick black of his torso almost touched my nose. My eardrums were pounding. The man was freakishly tall. I wasn’t a short guy, but he towered over me easily.
“If you won’t behave like a gentleman, I won’t be able to behave like a gentleman. So, Riz, tell me, how would you like this to go? The easy way—” He brought his lips to brush against the top of my ear, making me shiver. “—or the hard way? I’d have a lot of fun with the latter, though you might enjoy it considerably less than the alternative.”
A gush of air burst from my lungs. I would have certainly enjoyed the latter too.
“See, GPS-boy, now this looks more like a dream of mine. Does that skirt of yours come with a matching belt? A good spanking would be great.”
I felt more than heard him chuckle. His chest vibrated with it for a moment. Pinning me in place with that gaze of his, he retreated a couple of steps.
“Don’t tempt your luck, Riz. You might not like my version of a hard way.”
“Oh, I’m sure you’re delectable when you go all hard, GPS-boy.”
His eyes flashed a brighter green just for a moment, stealing my breath. My whole body was pounding, throbbing from just one glance. My knees began to trickle away. Fuck me speechless, I was getting hard.
“I’m Conrad D’Ollet. Captain Conrad D’Ollet. You may call me Captain.”
“Oh no, Sparky. Maybe I’ll call you Connie. It sounds… fitting. Considering the skirt and all, I mean.”
His eyes squinted just a bit, but other than that his face remained quite clear.
“Your next meal will be when I decide you’ve gained some manners. Someone will come in for your Guidance.”
With a smooth move, he turned his back on me and walked away. Him walking was something to behold, decisive steps but unhurried. He exuded a level of confidence I hadn’t seen before. I couldn’t tear my eyes away from him, and I did try. He was like a magnet.”


About the Author:
Liv Olteano is a voracious reader, music lover, and coffee addict extraordinaire. And occasional geek. Okay, more than occasional.

She believes stories are the best kind of magic there is. And life would be horrible without magic. Her hobbies include losing herself in the minds and souls of characters, giving up countless nights of sleep to get to know said characters, and trying to introduce them to the world. Sometimes they appreciate her efforts. The process would probably go quicker if they’d bring her a cup of coffee now and then when stopping by. Characters—what can you do, right?

Liv has a penchant for quirky stories and is a reverent lover of diversity. She can be found loitering around the Internet at odd hours and being generally awkward and goofy at all times. For The Win.

Be afraid. Be very afraid.